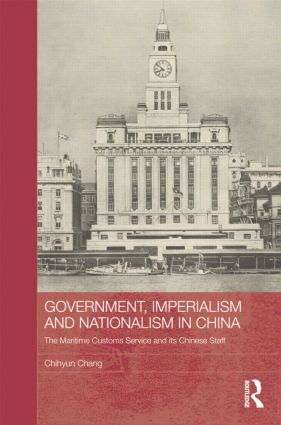 Government, Imperialism and Nationalism in China

The Maritime Customs Service and its Chinese Staff, 1st Edition

The Chinese Maritime Customs Service, which was led by British staff, is often seen as one of the key agents of Western imperialism in China, the customs revenue being one of the major sources of Chinese government income but a source much of which was pledged to Western banks as the collateral for, and interests payments on, massive loans. This book, however, based on extensive original research, considers the lower level staff of the Chinese Maritime Customs Service, and shows how the Chinese government, struggling to master Western expertise in many areas, pursued a deliberate policy of encouraging lower level staff to learn from their Western superiors with a view to eventually supplanting them, a policy which was successfully carried out. The book thereby demonstrates that Chinese engagement with Western imperialists was in fact an essential part of Chinese national state-building, and that what looked like a key branch of Chinese government delegated to foreigners was in fact very much under Chinese government control.

Chihyun Chang is a Post-doctoral Research Fellow in the Institute of Modern History, Academia Sinica, Taiwan.