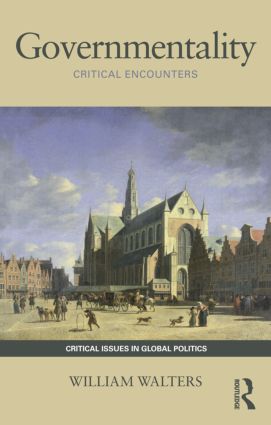 First developed by Michel Foucault more than thirty years ago, "governmentality" has become an essential set of tools for many researchers in the social and political sciences today. What is "governmentality"? How does this perspective challenge the way we understand political power and its contestation? This new introduction offers advanced undergraduate and graduate students both a highly accessible guide and an original contribution to debates about power and governmentality.

This book offers a set of conceptual and methodological observations intended to keep research in governmentality a living, critical thought project. Above all, it argues that the challenge of understanding the world calls for the addition of new thinking equipment to the governmentality toolbox. Governmentality: Critical Encounters will prove useful for students of social and political theory, international relations, political sociology, anthropology and geography.

Governmentality: Critical Encounters offers a well-written and clear account on the trajectory, dimensions and effects of “governmentality” in Foucault’s work and beyond. It is a richly insightful work by one of the leading scholars in the field.

Walters’ admirably clear discussion of both Foucault’s shifting understanding of governmentality and the broader field of governmentality research will be an invaluable guide for readers new to the field, while old hands will benefit from Walters provocative sketch of how it should develop.

What is governmentality? What theory does it advance and what practices does it illuminate? What is its place in the arc of Foucault’s thought and what is its value for social science research? How has the concept of governmentality been used, misused, and creatively reworked in the past three decades? What is its fecundity and what are its blindspots? Walters’ elegantly written, sophisticated yet highly accessible book answers these questions from a perspective that is judicious, erudite and relentlessly intelligent. This is an indispensable work.”

Walters offers his readers a critical encounter with the governmentality literature that reinserts pressing questions of politics and history, and that takes our thinking about governmentality to the international level. Compellingly and very accessibly written, this book makes indispensable reading for critical scholars of the arts and sciences of (international) government and politics.”

In this book William Walters casts his characteristically authoritative gaze over a number of key features of the governmentality literature. The result is A highly original and refreshing reading of both the cannon of work associated with governmentality and some unusual and fascinating topics not previously well explored. In a measured analytical and diagnostic style we have here a clear voice that both demarcates and clarifies Foucault’s own accounts of governmentality and those of his most ardent followers and critics.