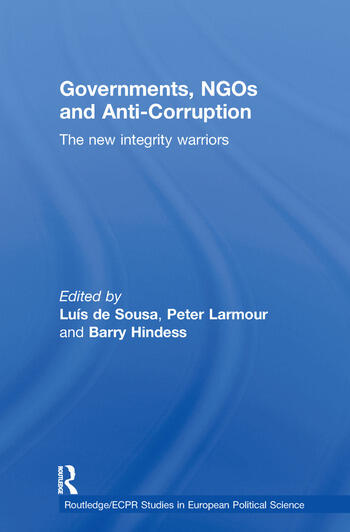 The purpose of this book is to understand the rise, future and implications of two important new kinds of "integrity warriors" - official anti-corruption agencies (ACAs) and anti-corruption NGOs – and to locate them in a wider context and history of anti-corruption activity.

Key issues of corruption and anti-corruption are discussed in an integrated and innovative way; through a number of country studies including Taiwan and South Korea, South East Europe, Fiji, Russia and the Baltic States. Some of the questions, used to examine the development of new anti-corruption actors, include:

Governments, NGOs and Anti-Corruption will be of interest to students and scholars of corruption, public policy, political science, developmental studies and law.

Luís de Sousa is an Associate Researcher at CIES-ISCTE, Portugal and Calouste Gulbenkian Fellow at the European University Institute, Italy.

Peter Larmour is a Reader in Public Policy and Governance at the Crawford School of Economics and Government, Australian National University, Australia.

Barry Hindess is Professor of Political Science in the Research School of Social Sciences at the Australian National University, Australia.

Peter Larmour is a Reader in Public Policy and Governance at the Crawford School of Economics and Government, Australian National University, Australia.