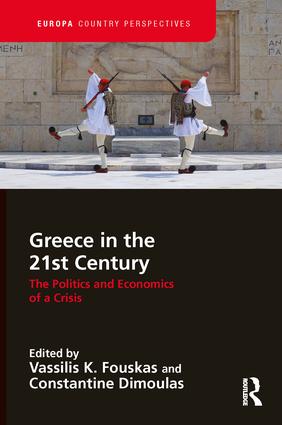 Greece in the 21st Century

The Politics and Economics of a Crisis, 1st Edition

For most of the first part of the 21st century Greece has been seen as a critical battlefield for the survival of the powerful and the adjustment or extinction of the weak, as if all the historical contradictions of the global financial crisis and the eurozone crisis were concentrated in that tiny part of the world, with a population of just 11 million people and a GDP of less than 2% of that of the European Union as a whole. While the country has been overpowered by the disciplinarian and deeply authoritarian policy mix of ordoliberal/neoliberal rules, as this book attempts to show, there is hope. Defeat does not end the crisis, and crisis means constant opportunity. In this state of affairs, all types of agencies try to take advantage of the conditions and opportunities in order to advance towards positions of power and provide the best of solutions for the class interests they represent. Thus, harsh conflict is inevitable and if history provides a yardstick, it is that in periods of conflict and crisis, the winner, usually, is the one who manages to strike the right political and social alliances at the right time.

The editors have assembled in this volume a number of interdisciplinary chapters and arguments which, despite their differences, share the strategic aim of a critique of both neoliberalism/ordoliberalism and new authoritarianism. Chapters examine the eurozone crisis from a variety of angles with reference to Greece, and Greek politics and society. With this collection of heterodox and scholarly essays, the authors and editors aim to offer a progressive understanding of current historical circumstances.

is an Assistant Professor in social administration and evaluation of social programmes at Panteion University, Greece.

is Professor of international politics and economics at the University of East London, UK, and the founding editor of the Journal of Balkan and Near Eastern Studies (Taylor & Francis).

Introduction and Acknowledgments - What's in the Greek Cauldron?

2 Sovereign Debt or Balance of Payments Crisis? Exploring the Structural Logic of Adjustment in the Eurozone

3 Greece and the Crisis of the Eurozone: A Structural Analysis

4 Is There Really a Eurozone Crisis?

8 The Political Effects of the Greek Economic Crisis: The Collapse of the Old Two-Party System

9 Blaming the Other: An Inquiry into the Cultural and Political Preconditions of the Greek Crisis

Constantine Dimoulas is an Assistant Professor in social administration and evaluation of social programmes at Panteion University, Greece.

is Professor of international politics and economics at the University of East London, UK, and the founding editor of the Journal of Balkan and Near Eastern Studies (Taylor & Francis).

The new Europa Country Perspectives series, from Routledge, examines a wide range of contemporary political, economic, developmental and social issues from areas around the world. Complementing the Europa Regional Surveys of the World series, Europa Country Perspectives will be a valuable resource for academics, students, researchers, policy-makers, business people and anyone with an interest in current world affairs.

While the Europa World Year Book and its associated Regional Surveys inform on and analyse contemporary economic, political and social developments at the national and regional level, Country Perspectives provide in-depth, country-specific volumes written or edited by specialists in their field, delving into a country’s particular situation. Volumes in the series are not constrained by any particular template, but may explore a country’s recent political, economic, international relations, social, defence, or other issues in order to increase understanding.

Haiti: From Revolutionary Slaves to Powerless Citizens: Essays on the Politics and Economics of Underdevelopment, 1804-2013 – Alex Dupuy

Contesting Spain? The Dynamics of Nationalist Movements in Catalonia and the Basque Country - Edited by Richard Gillespie and Caroline Gray

Catalonia: A New Independent State in Europe? A Debate on Secession within the European Union - Edited by Xavier Cuadras-Morató

Political Change in Switzerland: From Stability to Uncertainty - Clive Church

Greece in the 21st Century: The Politics and Economics of a Crisis - Edited by Vassilis K. Fouskas and Constantine Dimoulas

The Other Side of the Drugs War in Contemporary Mexico: Human rights, the public sphere and justice - Wil Pansters, Ben Smith and Peter Watt