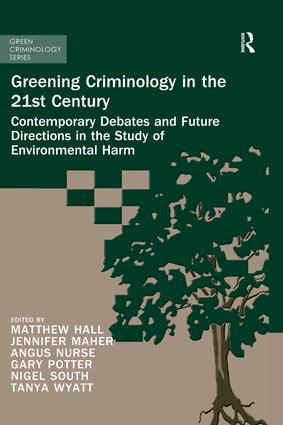 Greening Criminology in the 21st Century

Contemporary debates and future directions in the study of environmental harm, 1st Edition

In the 21st century, environmental harm is an ever-present reality of our globalised world. Over the last 20 years, criminologists, working alongside a range of other disciplines from the social and physical sciences, have made great strides in their understanding of how different institutions in society, and criminal justice systems in particular – respond – or fail to respond – to the harm imposed on ecosystems and their human and non-human components. Such research has crystallised into the rapidly evolving field of green criminology. This pioneering volume, with contributions from leading experts along with younger scholars, represents the state of the art in criminologists’ pursuit of understanding in the environmental sphere while at the same time challenging academics, lawmakers and policy developers to explore new directions in the study of environmental harm.

Chapter 3: Can the individual survive the greening of criminology?

Chapter 5: The animal other: legal and illegal theriocide

Chapter 9: The other side of agricultural crime: when farmers offend

Chapter 11: Implementation and enforcement of environmental law: the role of professional practitioners

Matthew Hall graduated with a PhD from the University of Sheffield in 2007, having previously graduated from Sheffield's MA in International Criminology programme. He became a Lecturer in Law and Criminal Justice in 2008 and a Senior Lecturer in 2011, both at the University of Sheffield School of Law. In 2014, Matthew was appointed Professor of Law and Criminal Justice and Director of Research at the University of Lincoln School of Law. He has been interviewed on behalf of the European Commission as an expert contributor in the field of victimology to assist the development of a new directive on victims’ rights and has also advised the South African Department of Justice and Constitutional Development concerning a review of South Africa’s Victim Empowerment Scheme. More recently, Matthew has pioneered research on environmental victimisation and the application of environmental justice principles in the criminal justice system at the national and international levels.

Jennifer Maher is a Senior Lecturer at the Centre for Criminology at the University of South Wales. She completed her PhD in Criminology at the University of Glamorgan in 2007. She is currently involved in a FP7 (European Commission) project which is focused on the impact of environmental crime in Europe. She is specifically looking at the illegal trade in wildlife. Jennifer has previously undertaken funded projects which have looked at animal abuse and status dogs. She has published internationally in peer-reviewed journals and has co-edited a special journal issue on animal abuse in Crime, Law and Social Change. In July 2013, she hosted the third ESRC-funded seminar on wildlife crime and animal abuse.

Angus Nurse is Associate Professor, Environmental Justice at Middlesex University’s School of Law. He researches criminology and law with specialisms in environmental crime; animal law and its enforcement and human rights and access to justice. His books include Policing Wildlife (Palgrave Macmillan 2015) and Animal Harm (Ashgate 2013). Angus was previously Lecturer in Criminology and Criminal Investigation at Birmingham City University (2011–2013) Research Fellow at Lincoln Law School (2008–2011), a Local Government Ombudsman's Investigator (2000–2008) and worked in investigations and compliance for the Royal Society for the Protection of Birds (1990–2000).

Gary Potter received his PhD from the University of Sheffield in 2007 where he also completed the MA in International Criminology (2001) and a BA in Law and Criminology (1999). He is currently Senior Lecturer in Criminology at Lancaster University Law School. As well as researching and publishing in Green Criminology, he writes about drug markets and cannabis cultivation. His recent books include Weed, Need and Greed: a study of domestic cannabis cultivation (2010, Free Association Books) and the edited collections Change and Continuity: Researching evolving drug landscapes in Europe (2014, Pabst) and Wide Weed: global trends in cannabis cultivation and its control (2011, Ashgate, co-edited with Tom Decorte and Martin Bouchard). He hosted the two-day Green Criminology conference in July 2014 which marked the culmination of the ESRC funded seminar series at which the chapters in this book were initially presented.

Tanya Wyatt completed her PhD in Criminology at the University of Kent in 2009 after having worked as a law enforcement officer in the United States for nearly five years and finishing her MA in Criminology at Eastern Michigan University. She joined Northumbria University in 2010 and is now a Reader in Criminology. Tanya was the Principal Investigator on the ESRC Green Criminology Research Seminar Series at which the chapters in this collection were presented.

Nigel South is a Professor in the Department of Sociology and a member of the Centre for Criminology, the Human Rights Centre and Essex Sustainability Institute at the University of Essex, England. He is a visiting Adjunct Professor in the School of Justice at Queensland University of Technology, Brisbane, a Fellow of the Academy of Social Sciences, a Fellow of the Royal Society of Arts, London and in 2013 received a Lifetime Achievement Award from the American Society of Criminology, Division on Critical Criminology. He has published widely on green criminology; drug use, health and crime; inequalities and citizenship; and theoretical and comparative criminology, and currently serves as the European Editor for Critical Criminology and on the Editorial Boards of Deviant Behavior and the International Journal for Crime, Justice and Social Democracy. With Avi Brisman, he is co-editor of the Routledge International Handbook of Green Criminology (2013) and co-author of Green Cultural Criminology: constructions of environmental harm, consumerism and resistance to ecocide (2014).

Now two decades old, green criminology - the study of environmental harm, crime, law, regulation, victimization, and justice - has increasing relevance to contemporary problems at local, national, and international levels. This series comes at a time when societies and governments worldwide seek new ways to alleviate and deal with the consequences of various environmental harms as they relate to humans, non-human animals, plant species, and the ecosystem and its components. Green criminology offers a unique theoretical perspective on how human behavior causes and exacerbates environmental conditions that threaten the planet's viability. Volumes in the series will consider such topics and controversies as corporate environmental crime, the complicity of international financial institutions, state-sponsored environmental destruction, and the role of non-governmental organizations in addressing environmental harms. Titles will also examine the intersections between green criminology and other branches of criminology and other areas of law, such as human rights and national security. The series will be international in scope, investigating environmental crime in specific countries as well as comparatively and globally. In sum, by bringing together a diverse body of research on all aspects of this subject, the series will make a significant contribution to our understanding of the dynamics between the natural world and the quite imperfect human world, and will set the stage for the future study in this growing area of concern.