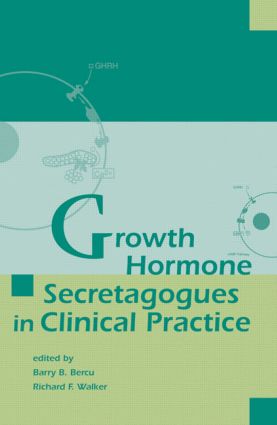 Recognizing the urgent need for an up-to-date review of new and innovative research on growth hormone (GH) secretagogues, this exclusive work furnishes the state of the art on the mechanisms of action, design, synthesis, evaluation, and clinical applications of GH secretagogues, including orally active and xenobiotic GH-releasing compounds. Beginning with a thorough historical perspective on the discovery and evolution of GH-releasing peptides (GHRPs) as therapeutic agents, Growth Hormone Secretagogues in Clinical Practiceanalyzes structural requirements for GH secretagogue efficacy demonstrates the use of mathematical models to predict differential values of individual stimuli for GH secretion from the pituitary reports on the development of a simple screening system based on polyclonal antibodies discusses laboratory synthesis of agonistic analogs intended for human and veterinary use proposes applications in managing conditions such as Turner's syndrome, acromegaly, diabetic retinopathy, glomerulosclerosis, tumors, and cancer provides physiological evidence for the effects of GHRP on behavior with a series of trials involving voluntary and forced exercise describes a new diagnostic test for evaluating pituitary function in slowly growing children and aging adults explores the interactions of GH secretagogues with other hormones and endogenous substances from sex steroids to interferons and much more!