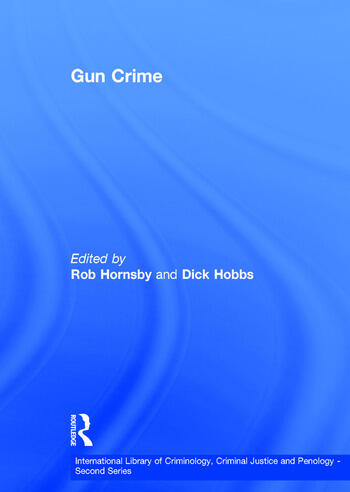 Gun Crime brings together a collection of texts drawn from a diverse range of disciplines which have contributed towards understanding the impact of gun crime within western societies. The book is divided into four interconnected sections which examine the use of firearms to commit offences. Part one explores the problems of youth, gang membership and guns in society. Part two examines the act of robbery where firearms are deployed by criminals in order to facilitate and commission robbery offences. Part three analyses the problem of violence and homicide associated with firearm offending. In the fourth and final part of the collection the texts focus on firearm injury trauma caused as a result of gun crime. The book provides insights for students and researchers, law enforcement agencies, community-based activists and policy-makers seeking to understand issues embedded within firearms offending and to develop initiatives to tackle gun crime.

Contents: Introduction; Part I Youth, Gangs and Guns: Gang-related gun violence: socialization, identity and self, Paul B. Stretesky and Mark R. Pogrebin; Gangs, gang homicides, and gang loyalty: organized crimes or disorganized criminals, Scott H. Decker and G.David Curry; The role of firearms in violence 'scripts': the dynamics of gun events among adolescent males, Deanna L. Wilkinson and Jeffrey Fagan; Gun crime: the market in and use of illegal firearms, Gavin Hales, Chris Lewis and Daniel Silverstone; Early onset offending and later violent and gun outcomes in a contemporary youth cohort, Cynthia Perez McCluskey, John D. McCluskey and Timothy S. Bynum; The association between weapon-carrying and the use of violence among adolescents living in or around public housing, Robert H. DuRant, Alan G. Getts, Chris Cadenhead and Elizabeth R. Woods; Examining the arsenal of juvenile gunslingers: trends and policy implications, Rick Ruddell and G. Larry Mays; 'Getting high and getting by': dimensions of drug selling behaviours among American Mexican gang members in South Texas, Avelardo Valdez and Stephen J. Sifaneck. Part II Robbery and Firearms: Stick-up, street culture, and offender motivation, Bruce A. Jacobs and Richard Wright; Up it up: gender and the accomplishment of street robbery, Jody Miller; Possession and use of illegal guns among offenders in England and Wales, Trevor Bennett and Katy Holloway; Generating compliance: the case of robbery, David F. Luckenbill; Armed and dangerous? the use of firearms in robbery, Ian O'Donnell and Shona Morrison; 'Stick 'em up, buddy': robbery, lifestyle, and specialization within a cohort of parolees, Shawn L. Schwaner; Robbery violence, Philip J. Cook. Part III Gun Crime, Violence and Homicide: Weapon use and violent crime: national crime victimization survey, 1993-2001, Craig Perkins; To kill or not to kill? Lethal outcomes in injurious attacks, Richard B. Felson and Steven F. Messner; Exploring the drugs-homicide connecti

Rob Hornsby is a Senior Lecturer in the Division of Sociology and Criminology at Northumbria University, UK. Dick Hobbs is Professor and Head of the Department of Sociology, London School of Economics and Political Science, UK.