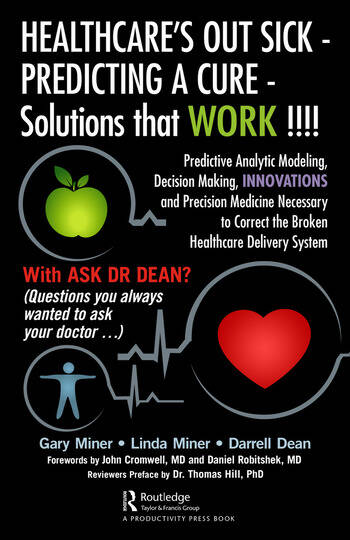 The U.S. healthcare system is in "complete chaos-disarray." Medical costs have increased significantly over the past 6 years with 70% increase for deductibles and 24% or more for health insurance premiums. All the while, workers earnings have either not increased or if they did, the pay raises were for less than the increase in the cost of medical care. The situation is unsustainable and the public wants the system fixed. This book offers ways of fixing the problems in healthcare.

HEALTHCARE's OUT SICK - PREDICTING A CURE - Solutions that WORK !!!!

first defines the "healthcare in crisis" problem. Through real patient experiences, the book describes the difficulties of getting through the maze of complexity among the plethora of "silo providers" which make up the industry. The heart of the book provides readers with a comprehensive solution that can work, a disruption that is necessary to provide Americans the medical care they need without the US public and healthcare providers and payors going into bankruptcy, insolvency or closure.

This book delves into digitized medicine, payor and provider reimbursement models, and value-based healthcare delivery. It also includes a philosophy or mode of thinking and operation for the solutions that are needed for diagnosis-effective, cost-effective, and time-efficient healthcare delivery, of which digitized medicine, value-based care, and payor reimbursement modes are just some of the factors. The authors propose that the real solution involves having the patient at the center of the issues and changing from an archaic gold standard way of thinking to a "Predictive Analytic thinking" where one gets at the real truth by doing "real science" that in the end becomes effective not only for the population but for the individual person. This all leads to real person-centered and person-directed medicine and healthcare delivery.

Successful Healthcare Delivery Systems Around the World: Today’s Patient Safety Concerns and Poor Delivery Methods in the USA—What Is Needed in the USA Today to Provide Successful Delivery of Safe, Needed, and Cost-Effective Healthcare

Current and Future Trends: Rectifying the Crisis–Chaos of the Past Few Decades Through Medical and Healthcare Research That Uses Quality Control, Predictive Analytics, and Decisioning That Is More Powerful Than Previous Methods in Leading to Accuracy and Correct Actions

The CURE—SOLUTIONS to Make Healthcare Delivery in the USA ACCURATE, EFFECTIVE, and COST-EFFICIENT

With her husband, Gary, she became immersed in the study of affective disorders and Alzheimer’s disease. In 1985, she and Gary founded the Familial Alzheimer’s Disease Research Foundation, which became a leading force in organizing both local and international scientific meetings, bringing together all the leaders in the field of genetics of Alzheimer’s from several countries, resulting in the first major book on the genetics of Alzheimer’s disease. She also coordinated the Tulsa site of one of the first drugs for Alzheimer’s Disease the Parke Davis Cognex Study, Parke Davis, Tulsa, OK.

For ten years, Dr. Miner served as community faculty for research projects of the second-year residents in the Tulsa based medical residency program. The research projects spanned many aspects of medical practice, according to the interests of the students, including medical interests of less developed nations. she has co-authored two books on Alzheimer’s Disease-Molecular Genetics of Alzheimer’s Disease, which was the first book on the genetics of Alzheimer’s, and a second book on Alzheimer’s caregiving.

Dr. Miner was a contributor to, writing numerous predictive analytic tutorials for Nisbet, et al, general data mining, the Handbook of Statistical Analysis and Data Mining Applications (co-authored by Drs. Robert A. Nisbet, Gary D. Miner, and John Elder), which received the 2009 American Publishers Award for Professional and Scholarly Excellence (PROSE). Miner was also a contributor, with tutorials, to Practical Text Mining and Statistical Analysis for Non-structured Text Data Applications, also received a PROSE award in February of 2013. She co-authored, Practical Predictive Analytics and Decisioning Systems for Medicine (2015) Elsevier. At present, she is Professor Emeritus at Southern Nazarene University and teaches online classes in ‘Introduction to Predictive Analytics’ and "Healthcare Predictive Analytics’ from the University of California-Irvine.

retired from position of Medical Director for Clinical and Operational Performance Improvement. Dr. Dean has also been the CME Surveyor for ACCME accreditation of hospitals for the Medical Association of Georgia. Previously, Dr. Dean was Internal Consultant for coding and documentation for Centrex Primary Care Network. He was also Associate Medical Director, Staff Physician, North Georgia Medical Association and serves as locum tenens for all 17 practice sites. He worked at the Georgia Department of Human Resources, Division of Public Health as the District Medical Director, Coosa Valley Health District. Dr. Dean received his Master of Public Health degree, Health Policy and Administration Track from Emory University, Rollins Schools of Public Health. Dr. Dean is currently the Medical Director of Quality and Medical Care for nursing home patients at Senior Medical Systems, LLC. He has held numerous medical staff positions throughout Georgia, Arizona and Texas. He has written numerous articles and has contributed material to several books. He received his Doctor of Osteopathy Degree from Kansas City University of Medicine and Biosciences and a Master of Public Health degree from the Rollins School of Public Health of Emory University. He is board certified in family medicine from the American osteopathic Board of Family Physicians.

received his B.S. from Hamline University, St. Paul, Minnesota with biology, chemistry and education majors; M.S. in Zoology & Population Genetics from the University of Wyoming, and his Ph.D. in Biochemical Genetics from the University of Kansas as the recipient of a NASA Pre-Doctoral Fellowship. During the doctoral study years, he also studied mammalian genetics at The Jackson Laboratory, Bar Harbor, ME, under a College Training Program on an NIH award; and another College Training Program at the Bermuda Biological Station, St. George’s West, Bermuda in a Marine Developmental Embryology Course, on an NSF award; and a third College Training Program held at the University of California, San Diego at the Molecular Techniques in Developmental Biology Institute, again on an NSF award. Following that he studied as a Post-Doctoral student at the University of Minnesota in Behavioral Genetics, where, along with research in schizophrenia and Alzheimer’s Disease, he learned "how to write books" from assisting in editing two book manuscripts of his mentor, Irving Gottesman, Ph.D. (Dr. Gottesman returned the favor 41 years later by writing two tutorials for this PRACTICAL TEXT MINING book).

In 1985 he and his wife, Dr. Linda Winters-Miner [author of several tutorials in this book] founded The Familial Alzheimer’s Disease Research Foundation [aka "The Alzheimer’s Foundation] which became a leading force in organizing both local and international scientific meetings and thus bringing together all the leaders in the field of genetics of AD from several countries, which then lead to the writing of the first scientific book on the genetics of Alzheimer’s Disease; this book included papers by over 100 scientists coming out of the First International Symposium on the Genetics of Alzheimer’s Disease held in Tulsa, OK in October, 1987. During part of this time he was also an Affiliate Research Scientist with the Oklahoma Medical Research Foundation located in Oklahoma City with the University of Oklahoma School of Medicine. Dr. Miner was influential in bringing all of the world’s leading scientists working on Genetics of AD together at just the right time when various laboratories from Harvard to Duke University and University of California-San Diego, to the University of Heidelberg, in Germany, and universities in Belgium, France, England and Perth, Australia were beginning to find "genes" which they thought were related to Alzheimer’s Disease.

During the 1990’s Dr. Miner was appointed to the Oklahoma Governor’s Task Force on Alzheimer’s Disease, and also Associate Editor for Alzheimer’s Disease for THE JOURNAL OF GERIATRIC PSYCHIATRY & NEUROLOGY, which he still serves on to this day. By 1995 most of these dominantly inherited genes for AD had been discovered, and the one that Dr. Miner had been working on since the mid-1980’s with the University of Washington in Seattle was the last of these initial 5 to be identified, this gene on Chromosome 1 of the human genome. At that time, having met the goal of finding out some of the genetics of AD, Dr. Miner decided to do something different, to find an area of the business world, and since he had been analyzing data for over 30 years, working for StatSoft, Inc. as a Senior Statistician and Data Mining Consultant seemed a perfect "semi-retirement" career. Interestingly (as his wife had predicted), he discovered that the "business world" was much more fun than the "academic world", and at a KDD-Data Mining meeting in 1999 in San Francisco, he decided that he would specialize in "data mining". Incidentally, he first met Bob Nisbet there who told him, "You just have to meet this bright young rising star John Elder!", and within minutes Bob found John introduced me to him, as he was also at this meeting. As Gary delved into this new "data mining" field, and looked at statistics text books in general, he saw the need for ‘practical statistical books’ and started writing chapters, and organizing various outlines for different books.