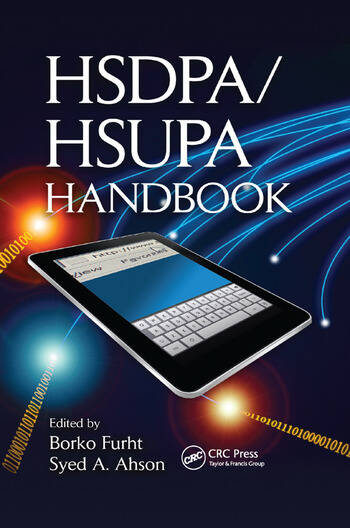 From basic concepts to research grade material, the HSDPA/HSUPA Handbook provides technical information on all aspects of HSDPA/HSUPA. With contributions from 30 experts from around the world, this comprehensive HSPA reference provides a global and authoritative perspective of this rapidly emerging technology.

Presenting information in a well-structured manner for ease of reference, this book presents accurate and up-to-date information on the full spectrum of topics related to HSPA technology, including future directions. The ideal desk reference for designers and planners of contemporary wireless communication networks, this book can also be adopted as a textbook for graduate and research-oriented courses that deal with HSPA.

Borko Furht is a professor and chairman of the Department of Computer Science and Engineering at Florida Atlantic University (FAU) in Boca Raton, Florida. He is also Director of the NSF-sponsored Industry/University Cooperative Research Center at FAU. Before joining FAU, he was a vice president of research and a senior director of development at Modcomp (Ft. Lauderdale), a computer company of Daimler Benz, Germany, a professor at University of Miami in Coral Gables, Florida, and a senior researcher in the Institute Boris Kidric-Vinca, Yugoslavia.

Professor Furht received a Ph.D. degree in electrical and computer engineering from the University of Belgrade. His current research is in multimedia systems, video coding and compression, 3D video and image systems, video databases, wireless multimedia, and Internet computing. He has been Principal Investigator and Co-PI of several multiyear, multimillion dollar projects – on Coastline Security Technologies, funded by the Department of Navy, One Pass to Production, funded by Motorola, and NSF PIRE project on Global Living Laboratory for Cyber Infrastructure Application Enablement, and NSF High-Performance Computing Project. He is the author of numerous books and articles in the areas of multimedia, computer architecture, real-time computing, and operating systems. He is a founder and editor-in-chief of the Journal of Multimedia Tools and Applications (Springer).

He has received several technical and publishing awards, and has consulted for many high-tech companies including IBM, Hewlett-Packard, Xerox, General Electric, JPL, NASA, Honeywell, and RCA, and has been an expert witness for Cisco and Qualcomm. He has also served as a consultant to various colleges and universities. He has given many invited talks, keynote lectures, seminars, and tutorials. He served on the Board of Directors of several high-tech companies.