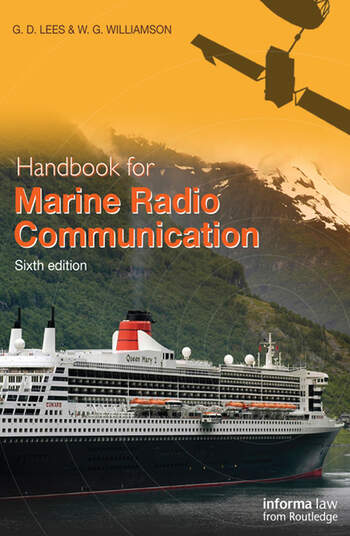 This bestselling book provides an incomparable reference source for all vessels using maritime radio communication systems, which are now a legislative requirement. It includes exhaustive coverage of all UK and international regulations relating to modern maritime communications, such as the crucial GMDSS, all contained within one singular volume.

This sixth edition has been fully updated to take into account major developments over the last five years, in particular the revised regulations introduced by the International Telecommunication Union in 2012. The authors deliver an authoritative guide to the complicated and changing world of radio communications, including:

Born in Liverpool and raised in Bebington Wirral, he was educated at Calday Grange Grammar School, West Kirby and trained as a radio officer at Riversdale College of Technology, Liverpool. He spent five years serving as a radio officer followed by a further six years as a radio and electronics officer on a wide range of UK registered vessels including passenger ships, general cargo, oil and chemical tankers, gas carriers and car/bulk cargo carriers.

He started teaching marine radio and electronics at Riversdale College in 1976 and became senior lecturer in charge of HND and GMDSS courses. After completing 21 years of teaching, he is now retired but continues his involvement in technical writing and advisory work specialising in the training needs of those involved in the marine radio communications and electronic navigational aids industries. In addition, he continues to teach GMDSS at Liverpool John Moores University on a sessional basis. He retains his appointment as GMDSS examiner on behalf of MCA/AMERC and recently returned to his role on the AMERC GMDSS examiner’s panel.

Born in Glasgow in 1943, he joined the Merchant Navy as a radio officer following initial training at the Glasgow Wireless College. He spent seven years at sea, during which time he served on a variety of vessels including general cargo ships, tramps and tankers. He continued his involvement with the marine industry as a marine electronics engineer based at Liverpool, gaining wide servicing experience on UK and foreign flag vessels. During this period he served for some years as an executive member of the Radio Officers’ Union.

After 20 years with the Marconi Marine Company, he joined the staff at Riversdale College of Technology in 1980 as a lecturer primarily concerned with radio officer training. Following a reorganisation, he became a senior lecturer at Liverpool Community College with particular responsibilities for all GMDSS courses, GOC, ROC and LRC until he retired in 2001. He currently teaches part-time on GMDSS courses at the Lairdside Maritime Centre. He remains an approved GMDSS examiner. He was a member of the AMERC’s Executive Committee for nine years and chaired the AMERC GMDSS Regulations Examination Panel for fifteen years. He is currently chairman of the Liverpool Marine Radio and Electronics Society.