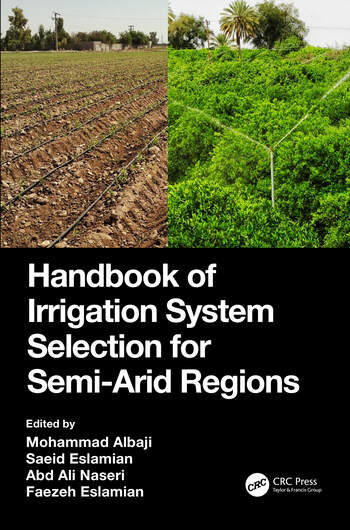 Focusing on semi-arid land, the book highlights parametric evaluation systems for irrigation purposes, along with the use of analytical hierarchy processes integrated with GIS to determine which systems are best suited. This comprehensive and well-illustrated handbook will be of great interest to students, professionals, and researchers involved with all aspects of irrigation in semi-arid regions.

is a faculty member at Shahid Chamran University of Ahvaz, Iran. He earned his PhD in Irrigation and Drainage Engineering from Shahid Chamran University of Ahvaz, Iran. Dr Albaji is active in the fields of Irrigation and Drainage,Precision Irrigation, Agricultural Water Management, Water Productivity, Water& Soil Salinity and Alkalinity, Soil Science, Land Suitablity for Irrigation, Land Suitability for Crops, and has more than seventy publications in reputed journals, books and refereed confernces. He has been working as a reviewer for many reputed journals, such as Agricultural Water Management,Computers and Electronics in Agriculture, Environment, Development and Sustainability, Transaction of the Royal Society of South Africa, Clean Soil, Air, Water etc. He had severalexecutive posts such as Dean of Jundishapur’s Water and Energy Research Institute(Shahid Chamran University of Ahvaz ; 2016-2018) , Head of Soil Science Department (Khuzestan Water & Power Authority; 2000-2012)etc. He was membership of the International Center for Biosaline Agriculture (ICBA), American Society of Civil Engineering(ASCE) etc.

Saeid Eslamian is a full professor of environmental hydrology and water resources engineering in the Department of Water Engineering at Isfahan University of Technology, where he has been since 1995. His research focuses mainly on statistical and environmental hydrology in a changing climate. In recent years, he has worked on modeling natural hazards, including floods, severe storms, wind, drought, pollution, water reuses, sustainable development and resiliency, etc. Formerly, he was a visiting professor at Princeton University, New Jersey, and the University of ETH Zurich, Switzerland. On the research side, he started a research partnership in 2014 with McGill University, Canada. He  has contributed to more than 600  publications in journals, books, and technical reports. He is the founder and chief editor of both the International Journal of Hydrology Science and Technology (IJHST) and the Journal of Flood Engineering (JFE). Eslamian is now associate editor of three important publications: Journal of Hydrology (Elsevier), Eco-Hydrology and Hydrobiology (Elsevier), Journal of Water Reuse and Desalination (IWA), and Journal of the Saudi Society of Agricultural Sciences (Elsevier).

Professor Eslamian is the author of approximately 35 books and 180 chapter books. Dr. Eslamian’s professional experience includes membership on editorial boards, and he is a reviewer of approximately 100  Web of Science (ISI) journals, including the ASCE Journal of Hydrologic Engineering, ASCE Journal of Water Resources Planning and Management, ASCE Journal of Irrigation and Drainage Engineering, Advances in Water Resources, Groundwater, Hydrological Processes, Hydrological Sciences Journal, Global Planetary Changes, Water Resources Management, Water Science and Technology, Eco-Hydrology, Journal of American Water Resources Association, American Water Works Association Journal, etc. UNESCO has also nominated him for a special issue of the Eco-Hydrology and Hydrobiology Journal in 2015. Professor Eslamian was selected as an outstanding reviewer for the Journal of Hydrologic Engineering in 2009 and received the EWRI/ASCE Visiting International Fellowship in Rhode Island (2010). He was also awarded outstanding prizes from the Iranian Hydraulics Association in 2005 and Iranian Petroleum and Oil Industry in 2011. Professor Eslamian has been chosen as a distinguished researcher of Isfahan University of Technology (IUT) and Isfahan Province in 2012 and 2014, respectively. In 2016, he was a candidate for national distinguished researcher in Iran.

Professor Eslamian finished Hakimsanaei High School in Isfahan in 1979. After the Islamic Revolution, he was admitted to IUT for a BS in water engineering and graduated in 1986. After graduation, he was offered a scholarship for a master’s degree program at Tarbiat Modares University, Tehran. He finished his studies in hydrology and water resources engineering in 1989. In 1991, he was awarded a scholarship for a PhD in civil engineering at the University of New South Wales, Australia. His supervisor was Professor David H. Pilgrim, who encouraged him to work on "Regional Flood Frequency Analysis Using a New Region of Influence Approach." He earned a PhD in 1995 and returned to his home country and IUT. In 2001, he was promoted to associate professor and in 2014 to full professor. For the past 24 years, he has been nominated for different positions at IUT, including university president consultant, faculty deputy of education, and head of department. Eslamian is now director for center of excellence in Risk Management and Natural Hazards (RiMaNaH).

Professor Eslamian has made three scientific visits to the United States, Switzerland, and Canada in 2006, 2008, and 2015, respectively. In the first, he was offered the position of visiting professor by Princeton University and worked jointly with Professor Eric F. Wood at the School of Engineering and Applied Sciences for one year. The outcome was a contribution in hydrological and agricultural drought interaction knowledge by developing multivariate L-moments between soil moisture and low flows for northeastern U.S. streams. Recently, Professor Eslamian has published the editorship of twelve handbooks published by Taylor  & Francis (CRC Press): the three-volume Handbook of Engineering Hydrology in 2014, Urban Water Reuse Handbook in 2016, Underground Aqueducts Handbook (2017), the three-volume Handbook of Drought and Water Scarcity (2017), Constructed Wetlands: Hydraulic Design (2020), the three-volume Flood Handbook (2020). He has also published two-volume Handbook of Water Harvesting and Conservation (2020) by Wiley-Blackwell and the New York Academy of Sciences, In addition, an Evaluation of Groundwater Storage Potentials in a Semiarid Climate by Nova Science Publishers is also his joint book publication in 2019.

Abd Ali Naseri is a full professor of irrigation and drainage in the Faculty of Water Science Engineering at Shahid Chamran University of Ahvaz, Iran. He earned his PhD in irrigation and drainage engineering from the University of Southampton, England, 1998. His research focuses mainly on irrigation and drainage, soil physics, leaching, precision drainage, agri-cultural water management, and modeling. He has contributed to more than 350 publications in journals, books, and technical reports. He has published more than 150 articles in many reputed journals, such as Agricultural Water Management, Journal of Irrigation and Drainage Engineering (ASCE), Irrigation and Drainage (ICID) Chemical Engineering Journal, Journal of Cleaner Production, Journal of Powder Technology, International Journal of Applied Earth Observation and Geoinformation, Journal of Ecological Engineering, Quarterly of RS & GIS for Natural Resources, Transaction of the Royal Society of South Africa, etc.
Professor Abd Ali Naseri is a member of journal editorial board of Agricultural Research, Journal of Applied Sciences, Asian Journal of Scientific Research, Journal of Agronomy and Irrigation Engineering and Sciences. He had supervised more than 120 MSc and doctoral dissertations and research projects. He earned four scientific awards (The top researcher of 2010 in Shahid Chamran University of Ahvaz; The top researcher of 2001 from the Sugarcane & by Products Development Company; The top researcher of 2000 in Hamedan Province, Iran; The winner of the second top paper in the 2d Conference of River Engineering, Ahvaz, Iran).
Professor Abd Ali Naseri has held several executive posts such as head of irrigation and drainage department in the Faculty of Water Science Engineering at Shahid Chamran University of Ahvaz, Iran (2009–2011; 2015–2017), member of expert commission of Shahid Chamran University Press Council (June 2011 to till date), member of the technical and expert committee on Irrigation and Drainage Research of Khuzestan Water and Power Authority (June 2009 to till date), member of regional committee of irritation and drainage in Khuzestan province (September 2011 to till date), head of the Drainage Researches Center (2015–2019) and director manager of Sugarcane and By Products Development Company (2019 to till date), etc.

Faezeh Eslamian is a PhD Holder of Bioresource Engineering in McGill University. Her research focuses on the development of a novel lime-based product to mitigate phosphorus loss from agricultural fields. Faezeh completed her bachelor and master’s degrees in Civil and Environmental Engineering from Isfahan University of Technology, Iran where she evaluated natural and low-cost absorbents for the removal of pollutants such as textile dyes and heavy metals. Furthermore, she has conducted research on the worldwide water quality standards and wastewater reuse guidelines. Faezeh is an experienced multidisciplinary researcher with interest in soil and water quality, environmental remediation, water reuse and drought management.