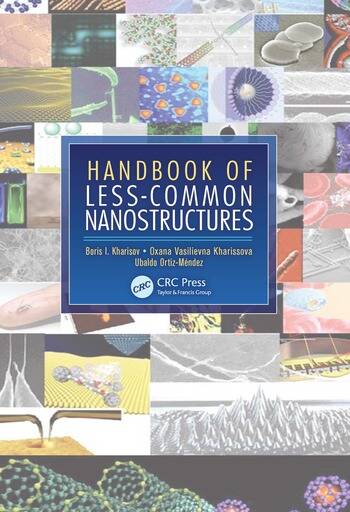 As nanotechnology has developed over the last two decades, some nanostructures, such as nanotubes, nanowires, and nanoparticles, have become very popular. However, recent research has led to the discovery of other, less-common nanoforms, which often serve as building blocks for more complex structures.

In an effort to organize the field, the Handbook of Less-Common Nanostructures presents an informal classification based mainly on the less-common nanostructures. A small nanotechnological encyclopedia, this book:

The Handbook of Less-Common Nanostructures discusses a classification system not directly related to the dimensionality and chemical composition of nanostructure-forming compounds or composite. Instead, it is based mainly on the less-common nanostructures. Possessing unusual shapes and high surface areas, these structures are potentially very useful for catalytic, medical, electronic, and many other applications.

Boris Ildusovich Kharisov, Dr. Hab.
Dr. Boris I. Kharisov (born in 1964, in Russia, has lived in Mexico from 1994, and naturalized in Mexico in 2003) is currently a Professor and Researcher at the Universidad Autónoma de Nuevo León (UANL). He took part in the liquidation of the consequences of the Chernobyl accident, working in the contaminated zone in 1987. Degrees: An MS in 1986, in radiochemistry and a PhD in inorganic chemistry in 1993, from the Moscow State University, Russia; Dr. Hab. in physical chemistry in 2006 from Rostov State University, Russia. Memberships: Mexican Academy of Science, National Researchers System (Level II), Materials Research Society.

He is the co-author of four books, three book chapters, 121 articles, and has two patents. He is co-editor of three invited special issues of international journals, and is the member of the editorial board of four journals. His specialties include coordination and inorganic chemistry, phthalocyanines, ultrasound, and nanotechnology.

Dr. Kharisov has three children. His biography was published in: "Who is Who in the World", "Outstanding People of the Twentieth Century", and more.

Oxana Vasilievna Kharissova, Ph. D.
Dr. Oxana V. Kharissova (born in 1969 in Ukraine, former USSR, has lived in Mexico from 1995, and naturalized in Mexico in 2004) is currently a Professor and Researcher at the UANL. Degrees: An MS in 1994, in crystallography from Moscow State University, Russia, and a Ph.D. in Materials from the Universidad Autónoma de Nuevo León, Mexico. Memberships: National Researchers System (Level I), Materials Research Society. She is the co-author of one book, 57 articles, and has two patents. Her specialties include nanotechnology (carbon nanotubes, nanometals, fullerenes), and crystallography.