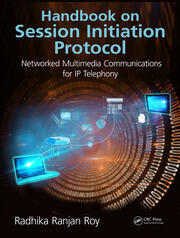 Session Initiation Protocol (SIP), standardized by the Internet Engineering Task Force (IETF), has emulated the simplicity of the protocol architecture of hypertext transfer protocol (HTTP) and is being popularized for VoIP over the Internet because of the ease with which it can be meshed with web services. However, it is difficult to know exactly how many requests for comments (RFCs) have been published over the last two decades in regards to SIP or how those RFCs are interrelated.

solves that problem. It is the first book to put together all SIP-related RFCs, with their mandatory and optional texts, in a chronological and systematic way so that it can be used as a single super-SIP RFC with an almost one-to-one integrity from beginning to end, allowing you to see the big picture of SIP for the basic SIP functionalities. It is a book that network designers, software developers, product manufacturers, implementers, interoperability testers, professionals, professors, and researchers will find to be very useful.

The text of each RFC from the IETF has been reviewed by all members of a given working group made up of world-renowned experts, and a rough consensus made on which parts of the drafts need to be mandatory and optional, including whether an RFC needs to be Standards Track, Informational, or Experimental. Texts, ABNF syntaxes, figures, tables, and references are included in their original form. All RFCs, along with their authors, are provided as references. The book is organized into twenty chapters based on the major functionalities, features, and capabilities of SIP.

Radhika Ranjan Roy is an electronics engineer, US Army Research, Development, and Engineering Command (RDECOM), Communications–Electronics Research, Development, and Engineering Center (CERDEC), Space and Terrestrial Communications Directorate (S&TCD) Laboratories, Aberdeen Proving Ground (APG), Maryland, since 2009. Before joining to US Army Research, he worked in various capacities in CACI, SAIC, AT&T/Bell Laboratories, CSC, and PDB since his graduation. He earned his PhD in electrical engineering with major in computer communications from the City University of New York, New York, in 1984, and MS in electrical engineering from the Northeastern University, Boston, Massachusetts, in 1978. He received his BS in electrical engineering from the Bangladesh University of Engineering and Technology, Dhaka, Bangladesh, in 1967. He has published more than 50 technical papers. He is holding and/or submitted over 30 patents. He authored a book titled Handbook of Mobile Ad Hoc Networks on Mobility Models in 2010.