Hearing Eye II
The Psychology Of Speechreading And Auditory-Visual Speech 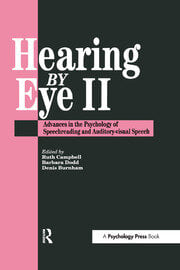 Hearing Eye II: The Psychology Of Speechreading And Auditory-Visual Speech

This volume outlines some of the developments in practical and theoretical research into speechreading lipreading that have taken place since the publication of the original "Hearing by Eye". It comprises 15 chapters by international researchers in psychology, psycholinguistics, experimental and clinical speech science, and computer engineering. It answers theoretical questions what are the mechanisms by which heard and seen speech combine? and practical ones what makes a good speechreader? Can machines be programmed to recognize seen and seen-and-heard speech?. The book is written in a non-technical way and starts to articulate a behaviourally-based but cross-disciplinary programme of research in understanding how natural language can be delivered by different modalities.