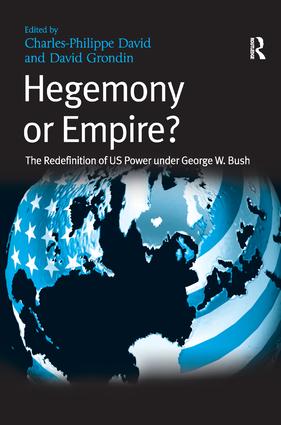 The Redefinition of US Power under George W. Bush, 1st Edition

American power has been subjected to extensive analysis since September 11, 2001. While there is no consensus on the state of US hegemony or even on the precise meaning of the term, it is clear that under George W. Bush the US has not only remained the 'lone superpower' but has increased its global military supremacy. At the same time, the US has become more dependent on its economic, financial and geopolitical relationships with the rest of the world than at any other time in its history, markedly since the events of 9/11. The distinguished scholars in this volume critically interpret US hegemony from a range of theoretical and topical perspectives. They discuss the idea of empire in the age of globalization, critique the Bush doctrine, analyze the ideologies underpinning a new American imperialism and examine the influence of neo-conservatism on US foreign and domestic policy.

'This is a comprehensive and very insightful scholarly contribution to the debate about the US exceptional and controversial role in international relations today. The authors address the topics of hegemony, power politics, geopolitics, and the balance of domestic and foreign policies. The book should be suitable for class use in the fields of international relations, US foreign policy, or global studies.' Eric Shiraev, George Mason University, USA 'The essays are all well-documented and offer much information. The authors present different theses, but all agree that the degree of US supremacy after 9/11 has had negative by-products for the international system.' The International Spectator '…timely and illuminating, allowing the reader to understand the issues discussed her a little better.' Etudes internationales