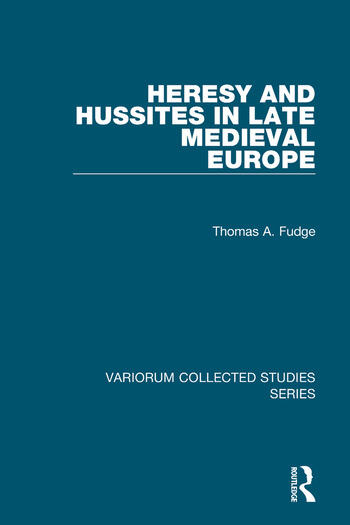 The followers of the martyred Bohemian priest Jan Hus (1371-1415) formed one of the greatest challenges to the medieval Latin Church. Branded as heretics, outlawed, then forced to fight for their faith as well as their lives, the Hussites occupy one of the most colorful and challenging chapters of European religious history. The essays reprinted in this book (along with one here first published in English and additional notes) explore the essence of the early Hussite movement by focusing on the nature and development of heresy both as accusation and identity. Heresy and Hussites in Late Medieval Europe first examines the definition of heresy, and its comparative nature across Europe. It investigates the unique practices of popular religion in local communities, while examining theology and its unavoidable conflicts. The repressive policy of crusade and the growth of martyrdom with its inevitable contribution to the formation of Hussite history is explored. The social application of religious ideas, its revolutionary outcomes, along with the intentional use of art in pedagogy and propaganda, situates the Czech heretics in the fifteenth century. An examination of leading personalities, together with the eventual and more formal church administration, rounds out the study of this remarkable era.

Contents: Introduction; Defending ‘heresy’: a theoretical elaboration; Image breakers, image makers: the role of heresy in divided Christendom; The ‘law of God’: reform and religious practice in late medieval Bohemia; The ‘crown’ and the ‘red gown’: Hussite popular religion; The night of Antichrist: popular culture, judgment and revolution in fifteenth-century Bohemia; Heresy and the question of Hussites in the southern Netherlands (1411-1431); ‘More glory than blood’: murder and martyrdom in the Hussite crusades; ‘Neither mine nor thine’: communist experiments in Hussite Bohemia; Želivský’s head: memory and new martyrs among the Hussites; Václav the Anonymous and Jan Príbram: textual laments on the fate of religion in Bohemia (1424-1429); Crime, punishment and pacifism in the thought of Bishop Mikuláš of Pelhrimov, 1420-1452; ‘An ass with a crown’: heresy, nationalism and Emperor Sigismund; Žižka’s drum: the political uses of popular religion; Hussite infant communion; Visual heresy and the communication of ideas in the Hussite reformation; Seduced by the theologians: Aeneas Sylvius and the Hussite heretics; Reform and the lower consistory in Prague, 1437-1497; Addenda and corrigenda; Index.

Thomas A. Fudge is Lecturer in Medieval European History in the School of Humanities at the University of New England, Armidale, Australia.