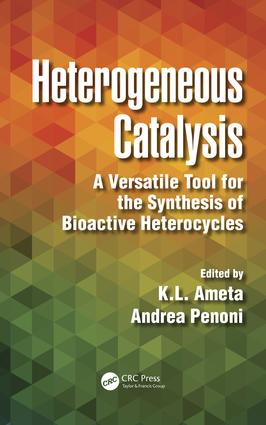 A Versatile Tool for the Synthesis of Bioactive Heterocycles, 1st Edition

For more than a century, bioactive heterocycles have formed one of the largest areas of research in organic chemistry. They are important from a biological and industrial point of view as well as to the understanding of life processes and efforts to improve the quality of life. Heterogeneous Catalysis: A Versatile Tool for the Synthesis of Bioactiv

K. L. Ametareceived his doctorate degree in organic chemistry from M. L. Sukhadia University, Udaipur, India. He is assistant professor of chemistry in the Faculty of Arts, Science and Commerce, Mody Institute of Technology and Science, Deemed University, Lakshmangarh, Rajasthan, India. His research area is the synthesis, characterization, and biological evaluation of bioactive heterocyclic systems of different sizes. In addition, he has keen interest in heterogeneous catalyzed organic synthesis and photocatalysis. He has published a number of research articles in various journals of national and international repute.