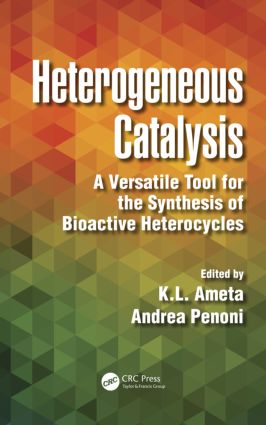 A Versatile Tool for the Synthesis of Bioactive Heterocycles, 1st Edition

For more than a century, bioactive heterocycles have formed one of the largest areas of research in organic chemistry. They are important from a biological and industrial point of view as well as to the understanding of life processes and efforts to improve the quality of life. Heterogeneous Catalysis: A Versatile Tool for the Synthesis of Bioactive Heterocycles highlights the recent methodologies used in the synthesis of such bioactive systems and focuses on the role of heterogeneous catalysis in the design and synthesis of various biologically active heterocyclic compounds of pharmacological interest.

Reflecting the focused studies currently conducted in these areas, the book also examines anticancer, antifungal, antibacterial, anti-HIV, anti-inflammatory, antioxidant, and many more biological activities of heterocyclic compounds. It is essential reading for postgraduate and research scholars in the fields of biochemistry, chemical biology, medicinal chemistry and pharmaceutical chemistry.

Ultrasound: An Efficient Tool for the Synthesis of BioactiveHeterocycles; Essam M. Hussein

Application of Heterogeneous Catalysts for the Synthesisof Bioactive Coumarins; Lokesh A. Shastri and Manohar V. Kulkarni

K. L. Ametareceived his doctorate degree in organic chemistry from M. L. Sukhadia University, Udaipur, India. He is assistant professor of chemistry in the Faculty of Arts, Science and Commerce, Mody Institute of Technology and Science, Deemed University, Lakshmangarh, Rajasthan, India. His research area is the synthesis, characterization, and biological evaluation of bioactive heterocyclic systems of different sizes. In addition, he has keen interest in heterogeneous catalyzed organic synthesis and photocatalysis. He has published a number of research articles in various journals of national and international repute.