Heterotopia and the City
Public Space in a Postcivil Society 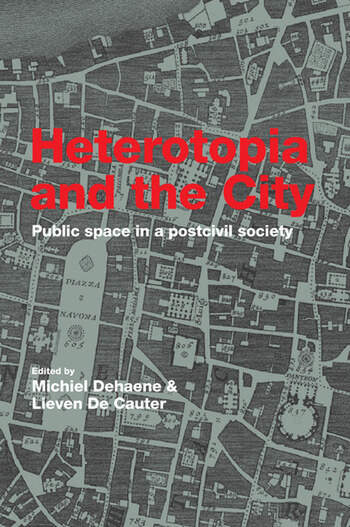 Heterotopia and the City: Public Space in a Postcivil Society

Heterotopia, literally meaning ‘other place’, is a rich concept in urban design that describes a space that is on the margins of ordered or civil society, and one that possesses multiple, fragmented or even incompatible meanings. The term has had an impact on architectural and urban theory since it was coined by Foucault in the late 1960s but it has remained a source of confusion and debate since. Heterotopia and the City seeks to clarify this concept and investigates the heterotopias which exist throughout our contemporary world: in museums, theme parks, malls, holiday resorts, gated communities, wellness hotels and festival markets.

With theoretical contributions on the concept of heterotopia, including a new translation of Foucault’s influential 1967 text, Of Other Space and essays by well-known scholars, the book comprises a series of critical case studies, from Beaubourg to Bilbao, which probe a range of (post)urban transformations and which redirect the debate on the privatization of public space. Wastelands and terrains vagues are studied in detail in a section on urban activism and transgression and the reader gets a glimpse of the extremes of our dualized, postcivil condition through case studies on Jakarta, Dubai, and Kinshasa.

Heterotopia and the City provides a collective effort to reposition heterotopia as a crucial concept for contemporary urban theory. The book will be of interest to all those wishing to understand the city in the emerging postcivil society and post-historical era. Planners, architects, cultural theorists, urbanists and academics will find this a valuable contribution to current critical argument.

Part 1: Heterotopology: ‘A Science in the Making’  Part 2: Heterotopia Revisited  Part 3: The Mall as Agora: The Agora as Mall  Part 4: Dwelling in a Postcivil Society  Part 5: Terrains Vagues: Transgression and Urban Activism  Part 6: Heterotopia in the Splintering Metropolis  Part 7: Heterotopia After the Polis

Michiel Dehaene is Lecturer in Urbanism at the Eindhoven University of Technology and a postdoctoral researcher at the department of Architecture, Urbanism and Planning, KULeuven. His work focuses on the epistemology of urbanism, dispersed urbanization and the interrelation between formal and informal modes of development.

Lieven De Cauter studied Philosophy and History of Art. He teaches at the department of Architecture, Urbanism and Planning, KULeuven, the media school RITS and the Berlage Institute, Rotterdam. He has published books on contemporary art, modernity, architecture, on the city and politics.