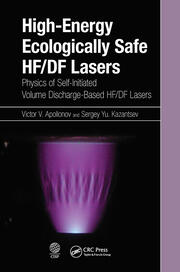 This book explores new principles of Self-Initiating Volume Discharge for creating high-energy non-chain HF(DF) lasers, as well as the creation of highly efficient lasers with output energy and radiation power in the spectral region of 2.6–5 μm. Today, sources of high-power lasing in this spectral region are in demand in various fields of science and technology including remote sensing of the atmosphere, medicine, biological imaging, precision machining and other special applications. These applications require efficient laser sources with high pulse energy, pulsed and average power, which makes the development of physical fundamentals of high-power laser creation and laser complexes of crucial importance.

examines the conditions of formation of SSVD, gas composition and the mode of energy input into the gas on the efficiency and radiation energy of non-chain HF(DF) lasers.

Victor V. Apollonov, Professor, General Physics Institute RAS, Russia. Apollonov V.V. is the leading specialist in the area of basic principles of creation and development of high power laser systems and high power laser radiation interaction with matter. He has made an outstanding input into creation and development of new branches of science - physical and technical fundamentals of high power laser optics and adaptive optics, investigation of physical processes in a high volume self-controlled volume discharges, creation of high power continuous wave, pulsed and high repetition rate pulse-periodic laser systems, high intensity laser radiation interaction with matter, high power laser application for an effective protection of valuable objects and water surface cleaning from oil films, medical applications for UV lasers. Recent results of his investigations related to the laser diode arrays phase-locking, mechanisms of shock waves merging for a rockets launch by high repetition rate pulse-periodic laser light, super long conductive channel based on the electrical breakdown in a dust plasma produced by mechanism of ablation, high repetition rate optical pulsating discharge applications, space debris elimination by laser, scalable mono-module disk laser and high power laser applications in the Arctic are under very intensive implementation in Russia and abroad. He is the author of more than 23 books, 800 presentations and 148 patents, as well as 954 journal articles. Apollonov V.V. is a high profile scientist and well known around all over the world, for his more than 49 years of international scientific activity, he has participated and organized more than 60 international conferences, symposiums and workshops, and prepared 32 doctoral candidates in physics and mathematics. For the last 5 years his scientific group has fulfilled more than 60 R and D contracts with customers from Japan, UK, Germany, France, China, Korea, Singapore and USA.