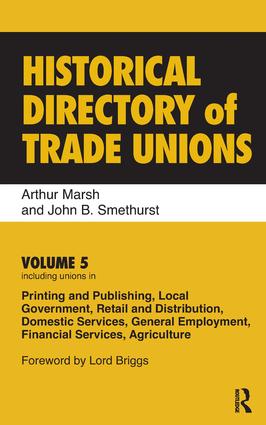 Edited by John B. Smethurst

Despite widespread interest in the trade union movement and its history, it has never been easy to trace the development of individual unions, especially those now defunct, or where name changes or mergers have confused the trail. In this respect the standard histories and industrial studies tend to stimulate curiosity rather than satisfy it. When was a union founded? When did it merge or dissolve itself, or simply disappear? What records survive and where can further details of its history be found? These are the kinds of question the Directory sets out to answer. Each entry is arranged according to a standard plan, as follows: 1. Name of union; 2. Foundation date: Name changes (if any) and relevant dates. Any amalgamation or transfer of engagements. Cessation, winding up or disappearance, with date and reasons where appropriate and available; 3. Characteristics of: membership, leadership, policy, outstanding events, membership (numbers). 4. Sources of information: books, articles, minutes etc; location of documentation.

'Clearly presented in five sections, it provides an indispensable resource…. Such diligence was the product of over fifteen years' hard work…. a remarkable and invaluable resource. All libraries and research institutions should acquire a copy.' North West Labour History 'As a tool for research it is invaluable and includes a bibliography of Irish Trade Union History as an Appendix.' Socialist History Society Newsletter ’This series is unique, an unmatched source of reliable data on trade unions and kindred bodies in Britain and Ireland, compiled with authority, competence and scholarship. It justifies the price, and is indispensable for all with an interest in working-class history and in the institutions of our evolving society.’ Reference Reviews ’Volume 5 of the Historical Directory of Trade Unions is a handbook and a source which is unlikely ever to be surpassed in the areas it covers. It is an invaluable book of reference for Labour historians and deserves to be on the shelf of any library dealing with labour or trade union history and added to the collection of every researcher studying industrial organisation in the areas with which it deals.’ Labour Heritage ’The fifth volume of the Historical Directory project is a veritable triumph over considerable adversity … a treasure trove of information, invaluable to those seeking explanations of trade union genealogy, unidentified badges, signposts to mergers, amalgamations and other trade union activities.’ Saothar

Arthur Marsh was a Fellow in Industrial Relations at St. Edmund Hall Oxford. He read Modern History and PPE at Oxford University, before joining the Oxford University Agricultural Economics Research Institute; later he became a staff tutor at the Oxford Delegacy for Extra Mural Studies, where he specialized in trade union education. He was elected Senior Research Fellow at St. Edmunds Hall in 1964. Mr Marsh served on various commissions and acted as a consultant to many government bodies. He was the author of many books and papers and began to publish the Historical Directory series in 1984. He died on 2 August 1999. John B. Smethurst is a retired electrical engineer and a graduate of Sheffield and Warwick Universities. He was a founder member of the Eccles and District Local History Society and the Lancashire Federation of Local History Societies. The author of numerous papers and articles on the Labour movement, he is the membership secretary of the North West Labour History Group and a well known collector of Labour, co-operative and trade union memorabilia.