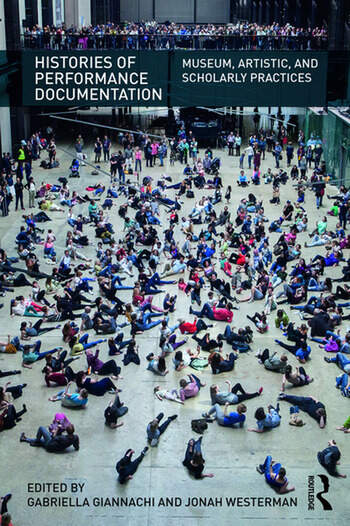 Histories of Performance Documentation traces the many ways in which museums have approached performance works from the 1960s onwards, considering the unique challenges of documenting live events. From hybrid and interactive arts, to games and virtual and mixed reality performance, this collection investigates the burgeoning role of the performative in museum displays.

Gabriella Giannachi and Jonah Westerman bring together interviews and essays by leading curators, conservators, artists and scholars from institutions including MoMA, Tate, SFMOMA and the Whitney, to examine a range of interdisciplinary practices that have influenced the field of performance documentation. Chapters build on recent approaches to performance analysis, which argue that it should not focus purely on the live event, and that documentation should not be read solely as a process of retrospection. These ideas create a radical new framework for thinking about the relationship between performance and its documentation—and how this relationship might shape ideas of what constitutes performance in the first place.

Introduction: Practical Histories: How We Do Things with Performance by Jonah Westerman

Chapter 11. ¬Performing the Archive and Exhibiting the Ephemeral by Barbara Clausen.

Chapter 12. At the edge of the ‘living present’: re-enactments and re-interpretations as strategies for the preservation of performance and new media art by Gabriella Giannachi.

Afterword: The intention of the artist and the point of view of the audience, performance documentation revisited, by Gabriella Giannachi.

Gabriella Giannachi is Professor in Performance and New Media at the University of Exeter, UK.

is Assistant Professor of Art History at Purchase College, State University of New York. From 2014-2016 he was AHRC Postdoctoral Research Associate at Tate, and in 2016-17 he was Chester Dale Senior Fellow in Art History at The Metropolitan Museum of Art.