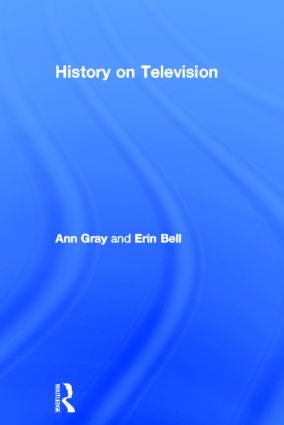 In recent years non-fiction history programmes have flourished on television. This interdisciplinary study of history programming identifies and examines different genres employed by producers and tracks their commissioning, production, marketing and distribution histories.

With comparative references to other European nations and North America, the authors focus on British history programming over the last two decades and analyse the relationship between the academy and media professionals. They outline and discuss often-competing discourses about how to ‘do’ history and the underlying assumptions about who watches history programmes.

considers recent changes in the media landscape, which have affected to a great degree how history in general, and whose history in particular, appears onscreen. Through a number of case studies, using material from interviews by the authors with academic and media professionals, the role of the ‘professional’ historian and that of media professionals – commissioning editors and producer/directors - as mediators of historical material and interpretations is analysed, and the ways in which the ‘logics of television’ shape historical output are outlined and discussed.

Building on their analysis, Ann Gray and Erin Bell ask if history on television fulfils its potential to be a form of public history through offering, as it does, a range of interpretations of the past to and originating from or including those not based in the academy. Through consideration of the representation, or absence, of the diversity of British identity – gender, ethnicity and race, social status and regional identities – the authors substantially extend the scope of existing scholarship into history on television

will be essential reading for all those interested in the complex processes involved in the representation of history on television.

'Gray and Bell bring a combination of historical and television scholarship and this conjunction is new and interesting. Their range of interviews have given them key insights to how historians think about television, the attention paid to the audience and the mechanics of programming allows us to think for the first time about the 'reality' of making historical shows. History on Television is without equal as an account of historical television in the UK.' - Jerome de Groot, University of Manchester, UK

'The most interesting public history book I have read this year is Ann Gray’s and Erin Bell’s History on Television (Routledge, 2012), a must-read for anyone who wants to understand how history is commissioned and the audience segmented by producers; and it convincingly analyses how and why women historian-presenters often get a rough deal on the telly.' - Salon

"Undoubtedly the strength of History on Television centres on the range of interviews with commissioners and programme-makers that Gray and Bell have managed to collect. This emphasis on oral testimony reflects similar trends in history programming of incorporating personal stories and lived experience into representations of the historical past of a nation. This empirical endeavour also raises important questions for us related to gender, race and ethnicity, and social class." - Janet McCabe, Birkbeck, University of London, UK

Introduction. 1. The Business of Television: public service to brand identity 2. Landmark and Flagship Television: heritage and national identity 3. Commemorative and ‘historical event’ television: memory and identity 4. Re-enactment: engagement, experience and empathy 5. Who Do ‘They’ Think ‘We’ Are?: considering the audience. Conclusion: Problematizing ‘Public History’ – what is rarely there?