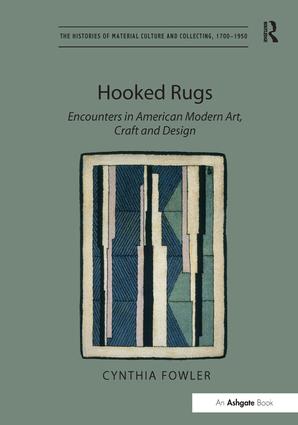 Through a close look at the history of the modernist hooked rug, this book raises important questions about the broader history of American modernism in the first half of the twentieth century. Although hooked rugs are not generally associated with the avant-garde, this study demonstrates that they were a significant part of the artistic production of many artists engaged in modernist experimentation. Cynthia Fowler discusses the efforts of Ralph Pearson and of Zoltan and Rosa Hecht to establish modernist hooked rug industries in the 1920s, uncovering a previously undocumented history. The book includes a consideration of the rural workers used to create the modernist narrative of the hooked rug, as cottage industries were established throughout the rural Northeast and South to serve the ever increasing demand for hooked rugs by urban consumers. Fowler closely examines institutional enterprises that highlighted and engaged the modernist hooked rugs, such as key exhibitions at the Museum of Modern Art and the Metropolitan Museum of Art in the 1930s and '40s. This study reveals the fluidity of boundaries among art, craft and design, and the profound efforts of a devoted group of modernists to introduce the general public to the value of modern art.

'The articulation of craft's complex position in modernism is perhaps the most salient of the book's achievements. Fowler's history is straightforward, well referenced and clear.' Textile History