Hospitality Sales and Marketing
An Evolutionary Journey with Howard Feiertag 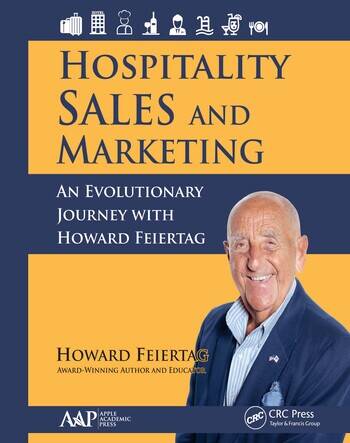 Hospitality Sales and Marketing: An Evolutionary Journey with Howard Feiertag

Grouped by general topic, this collection of the best "Sales Clinic" columns in Hotel Management written by Howard Feiertag over the course of 35 years provides an abundance of juicy nuggets of tips, tactics, and techniques for professionals and newbies alike in the hospitality sales field. Readers will take a journey down the road of the development of hospitality sales from the pre-technology era (when knowing how to use a typewriter was a must) to today’s reliance on digital technology, rediscovering that many of the old techniques that are still applicable today.

1. General Managers’ Involvement with Sales  2. Managing Salespeople Requires Daily, Weekly Reviews  3. The Working of a Hotel Property Sales Operation  4. Techniques for Increasing Sales  5. Working with the Group Markets  6. The Travel Agent and Leisure Travel Market  7. Sales Planning and Sales Calls  8. Hospitality Sales Training  9. The Negotiation Process in Sales  10. Attributes of Successful Sales Persons  11. Helpful Tips for Hotel Sales Staff  12. Action Plans for Marketing and Sales  13. Working on Contracts for Groups  14. Everyone at a Property Is Involved In Sales  15. A Professional Approach to Hospitality Sales along with Networking  16. Understanding the Features of Your Product, Especially F&B  17. HR in Connection with Sales Staff Employment

Howard Feiertag, a well-known hospitality industry veteran, is a member of the faculty at Virginia Polytechnic Institute and State University, Blacksburg, VA. The department was recently renamed the Howard Feiertag Department of Hospitality and Tourism Management in his honor. Before joining Virginia Tech, where he has been teaching for about 30 years, he had built up an extensive background in hospitality, including work in convention bureau management, hotel operations, food and beverage, sales and marketing, catering, hotel operations, meetings and convention management, as well as tour and travel. He was the group and meetings editor for Travel Trade Publications as well as a regular monthly columnist for Corporate & Incentive Travel magazine and Hotel Management magazine for over 35 years.

“This collection of ‘Sales Clinic’ columns provides an eye-opening account from one of the industry’s true leaders, defining how we operated and how it has evolved over the years. In compiling his many instructive ‘Sales Clinic’ columns, which Howard Feiertag contributed to Hotel Management magazine over a period of 35 years, he has created a real-life narrative of the evolution of hotel sales. Reflecting on earlier years when Howard and I conducted sales calls for our own hotel properties, I find it truly amazing how this business and its professional practices have evolved. For instance, Howard’s first article in January 1980 noted that sales people needed a car and should know how to type. In those days, of course, we communicated with clients and prospects much differently than today—by letter, in person or with a phone call. While many of the time-tested practices for sales engagement remain the same, there’s no question the process has vastly advanced. Having a record of this development is both constructive and valuable.”

“When Howard Feiertag called me in 1979 to lament what he perceived as a lack of focus on sales topics in, Hotel & Motel Management he modeled the best behavior of a hotel sales professional. He was well informed, cordial, respectful, and direct. He identified a need to be filled, and in his own gracious way, asked for the order. How could I have done anything other than give him an opportunity to pen an article for the magazine? Howard’s first column, published in 1980, wa sso well received that I hired him to be a regular contributor. Little did I know that he would retain his column, despite multiple management and ownership changes, 35 years later. His longevity with the magazine is a testament to the wisdom of his words. Imagine how many sales professionals have gained knowledge and received career guidance through Howard’s sage insight and advice. This compilation of Howard’s work assures its legacy and illuminates the timeless tenets of hospitality.”

<b>“I have the great fortune to get to spend every work day with this living legend in the hospitality industry. Now readers can get a taste of what that’s like through this compilation of Howard Feiertag’s sales clinic columns posted in Hotel Magazine over an incredible 35 years. The collection is a tangible representation of the history of hotel and meetings sales and the embodiment of ‘the more things change the more things stay the same.’ As Howard is fond of saying, despite vast changes in technology, the overall hospitality market, and the global marketplace, providing excellent service to people is still at the core of what we do in the hospitality and tourism business. Crack open this book and take advantage of a lifetime of wisdom and advice!” </b>