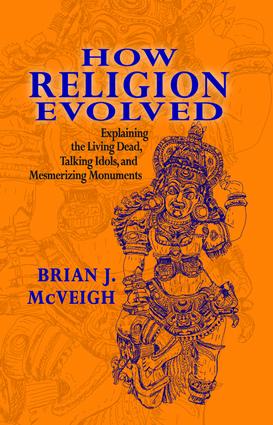 Why did many religious leaders—Moses, Old Testament prophets, Zoroaster—claim they heard divine voices? Why do ancient civilizations exhibit key similarities, e.g., the "living dead" (treating the dead as if they were still alive); "speaking idols" (care and feeding of effigies); monumental mortuary architecture and "houses of gods" (pyramids, ziggurats, temples)? How do we explain strange behaviour such as spirit possession, speaking in tongues, channelling, hypnosis, and schizophrenic hallucinations? Are these lingering vestiges of an older mentality?

Eventually, humans had to culturally acquire new cognitive skills (modern religions) to accommodate increasing social pressures: selves replaced the gods and history witnessed an "inward turn." This psychological interiorization of spiritual experience laid the foundations for the world's great religions and philosophies that arose in India, China, Greece, and the Middle East in the middle of the first millennium BCE.

Part I: The World According to the Gods

1 The Failure of Science to Explain Religion

2 Why the Gods Began to Speak

Part II: When the Gods Spoke and Walked among Us

5 Towns as the Domain of the Gods

8 Mortuary Monuments: How the Gods Awed Their Followers

14 Prayers, Possessions, and Prophecies: Conjuring Up the Missing Gods

16 A Change of Mind in the Ancient World

17 The Axial Age: The World Reborn without Gods

19 Introcosm: A New World of Space and Time

20 The Self Replaces the Gods

21 From Revelation to Reasoning

Epilogue: Science and Politics as Neo-Religion

A How to Chase Ghosts

C Gods on the Brain: Neurotheology

D The Problem with "Cultural Evolution"

F The Limitations of Evolutionary Psychology

I Verification and Applications of Jaynes's Theories

K A History of Mentalities

O Solving the Mystery of Hallucinations

Q What the Gods Can Teach Us: A New Understanding of the Mind