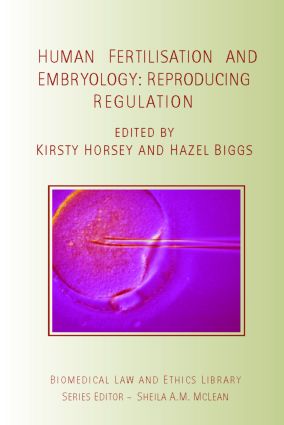 Relevant to students, academics and practitioners across the globe, this original volume highlights contemporary issues associated with assisted reproduction and embryology and critically analyzes the law surrounding human reproduction in the light of case law and technological developments since the Human Fertilisation and Embryology Act (HFE Act) Act was passed in 1990.

Tackling issues from an interdisciplinary perspective, the authors identify and evaluate areas that have provoked intense public and academic debate as well as those where further or renewed regulation is needed. Focusing primarily on the legal and ethical issues involved in regulating this area in the UK, which is at the forefront of developing legislation in this area, this book has international relevance as many countries have used the UK as a model for their own legislation.

This text is suitable for a broad range of readers, including legal academics, law students and practitioners interested in the areas of medical/healthcare law and ethics, bioethics and moral philosophy, family law, sociology and reproductive medicine and genetics.

"[Human Fertilisation and Embryology does] a wonderful

job of encouraging readers to think critically about regulatory issues

around human reproductive science, and to remember the very subjective

Dr Kirsty Horsey is a lecturer in law at the University of Kent. She is reproduction editor of BioNews, a web and email based service of news, information and comment on assisted reproduction and human genetics.