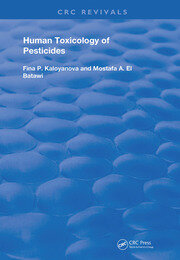 First Published in 1991, this book conducts a systematic analysis of existing information regarding the toxicological effects of pesticides on humans. The book identifies the negative health effects related to exposure to pesticides and the biological changes required to undertake biological monitoring. The book also discusses the importance and magnitude of the problem for different kinds of pesticide applications in different parts of the world, explains the toxicodynamics and clinical picture of acute and chronic intoxications resulting from exposure to different groups of pesticides and selected individual substances, and evaluates existing methods and limitations for assessing human exposure to pesticides. Pesticide manufacturers, occupational health professionals, epidemiologists, environmentalists, government agencies and others concerned with the effects of pesticides on human populations should consider this book essential reading.

Dr. Fina P. Kaloyanova, M.D., Ph.D., D.Sc. , is professor and head of the Department of Toxicology in the Research Institute of Hygiene and Occupational Health, Medical Academy, Sofia, Bulgaria., Dr. Kaloyanova graduated in 1951 to the Medical Faculty in Sofia. In 1961 she obtained her Ph.D. and in 1974 her D.Sc. in the field of pesticide toxicology. She began working as a researcher in 1951, a senior researcher in 1961, and a professor in 1969. From 1972 to 1984 she was the director of the Research Institute of Hygiene and Occupational Health., Dr. Kaloyanova was a president of the Bulgarian Society of Preventive Medicine and now is a member of the board of the National Association of Medical Research Societies. She was vice president of the International Association of Rural Medicine from 1972 to 1975, and a board member of the Permanent Commission and Internatinal Association for Occupational Health from 1972 to 1978. She was elected as a member of the International Academy of Environmental Safety., She has received several Distinguished Service Awards from the Medical Academy, Ministry of Public Health, Bulgarian Government., Dr. Kaloyanova has been a member of the expert panel on occupational health of the World Health Organization since 1972. She participated as a temporary advisor and consultant of more than 50 WHO meetings. She has presented many guest lectures at international and national courses in Egypt, Cuba, China,U.S.S.R, Algeria, Poland, Yugoslavia, and elsewhere. Dr. Kaloyanova has published over 250 research papers and books. Her current major research interests relate to pathogenesis of the pesticide intoxication and determination of the threshold level of the toxic action., Dr. Mostafa A. El Batawi, M.D., D.Sc. , is an adjunct professor at the University of Pittsburgh Graduate School of Public Health and a consultant to the World Health Organization, Geneva, Switzerland., Dr. El Batawi received his M.D. in 1951 from Cairo (Egypt) University Faculty of Medicine. In 1957, he earned his Masters of Public Health from the University of Pittsburgh and received his D.Sc. in Occupational Health two years later. From 1957 to 1960 he was a resident in internal medicine, neuropsychiatry, and psychiatry at St. Francis General Hospital, Montifore Hospital, and Western’s Psychiatric Institute and Clinic, University of Pittsburgh, respectively., Dr. El Batawi served as the Chief Medical Officer for the Office of Occupational Health, WHO Headquarters, Geneva, from 1970 to 1988. He has been chairman and professor of the Department of Occupational and Environmental Health Sciences, College of Medicine, New York Institute of Technology. He served as Regional Advisor in Occupational Health for Asia and Western Pacific with the International Labour Organization and the United Nations’ Development Programme and was associate professor and head of the Department of Occupational Health, University of Alexandria, Egypt., Dr. El Batawi has been a member of the International Commission in Occupational Health since 1965 and was a board member from 1981 to 1988. He is a member of the International Epidemiological Association, the American Occupational Medical Association, the American Industrial Hygiene Association, and the Society for Advanced Medical Systems. He is an honorary member of the German Association of Industrial Medicine, the Polish Association for Occupational Medicine, and the International Association for Agricultural Medicine and Rural Health. Dr. El Batawi is also a member of the American College of Preventive Medicine, the Scientific Committee on Occupational Epidemiology of the International Commission on Occupational Health, the New York Academy of Sciences, and the American Human Factors Society., Dr. El Batawi received the third Theodore F. Hatch Lecture and award from the Graduate School of Public Health, Pittsburgh, and the American Conference of Governmental Industrial Hygienists, as well as the Distinguished Graduate Medallion from the Graduate School of Public Health’s Alumni Association, University of Pittsburgh. He was awarded the Shield of Honor for Serving Humanity in the Fields of Medicine and Health from the Union of Medical Professions, Cairo, Egypt. He has also received the Award of the National Institute for Occupational Safety and Health of the United States for Services to the Health of Working People in the World and the Commander’s Cross for “the best contribution to Occupational Health” from the President of the Republic of Poland.