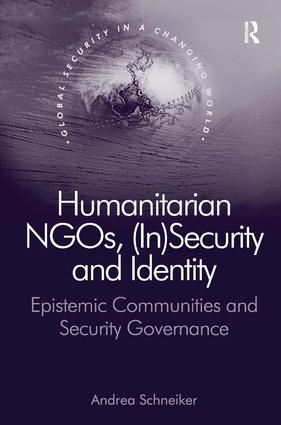 Increasingly humanitarian NGOs operate in the context of armed conflicts where the security risks are higher than in contexts of natural disaster. Working in Afghanistan, Somalia, Sudan, South Sudan, Pakistan and Sri Lanka is particularly dangerous for humanitarians. This existential threat affects the physical existence of aid workers and the implementation of humanitarian programs, and the core beliefs of humanitarians and the underlying principles of humanitarian action. For NGOs it is difficult to accept that they are attacked despite their good intentions, sometimes even by the very communities they seek to help. For these reasons, humanitarian NGOs have to change their approaches to security by not only adapting their policies, procedures and structures to the changing environment, but also reviewing the underlying principles of their work. This book contributes to debates by demonstrating how issues of (in)security affect humanitarian NGOs and the humanitarian identity, situating the structural changes within the humanitarian NGO community in the context of conflict aid governance and explains how non-state actors establish their own governance structures, independent from state-sponsored solutions, and contributes to the emerging literature on the redefinition of the concept of epistemic communities.

’Humanitarian workers are being attacked and killed in ever greater numbers. Combining sophisticated theory and in-depth empirical research, Andrea Schneiker sheds new light on the ways that humanitarians are responding to these threats. By elaborating the concept of epistemic communities with different forms of trust in and among humanitarian organizations, she innovatively shows how diverse security experts have created networks to promote and implement security policies. This volume is required reading for practitioners and scholars who want to understand how the humanitarian system has responded to the growing security challenges.’ Dennis Dijkzeul, Ruhr University Bochum, Germany ’Provides a fascinating account of the important role the epistemic community of humanitarian security experts has played in establishing security governance for international humanitarian NGOs. This timely volume informs us of the many new challenges inherent in humanitarianism today, especially in the context of core debates surrounding the politicization and militarization of aid. This compelling book is a valuable contribution to the epistemic communities literature.’ Mai’a K. Davis Cross, Northeastern University, Boston, USA

Andrea Schneiker is Professor of Political Science at the University of Siegen. She received her PhD in political science from the University in MÃ¼nster. She has published in Disasters and VOLUNTAS: International Journal of Voluntary and Nonprofit Organizations, as well as in Millennium, Comparative European Politics, Security Dialogue and Cambridge Review of International Affairs (all together with Jutta Joachim).

Global Security in a Changing World

Global Security in a Changing World

Globalisation is changing the world dramatically, and a very public debate is taking place about the form, extent and significance of these changes. At the centre of this debate lie conflicting claims about the forces and processes shaping security. As a result, notions of inequality, poverty and the cultural realm of identity politics have all surfaced alongside terrorism, environmental changes and bio-medical weapons as essential features of the contemporary global political landscape. In this sense, the debate on globalisation calls for a fundamental shift from a status quo political reality to one that dislodges states as the primary referent, and instead sees states as a means and not the end to various security issues, ranging from individual security to international terrorism. More importantly, centred at the cognitive stage of thought, it is also a move towards conceiving the concept of insecurity in terms of change. The series attempts to address this imbalance by encouraging a robust and multi-disciplinary assessment of the asymmetrical nature of globalisation. Scholarship is sought from areas such as: global governance, poverty and insecurity, development, civil society, religion, terrorism and globalisation.