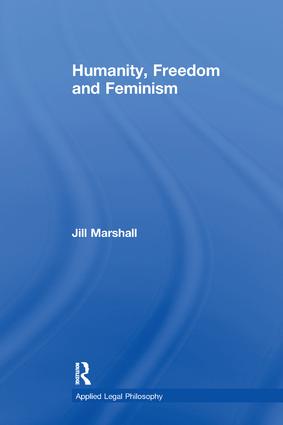 While some feminists seek to use ideas of the 'universal human subject' to include women, others argue that such ideas are intrinsically masculine and exclude the feminine. This book analyzes and critiques 'second wave' feminists who discuss how philosophers such as Plato and Aristotle, Descartes, Hobbes and Kant regard human beings and their capacities. The author suggests adopting an inclusive universal concept of the human being, drawn from ideas of positive liberty from the liberal tradition, Hegelian ideas of the formation of the free human being in society, and care ethics. The book links this theoretical perspective to international human rights and humanitarian law, drawing together areas of theory usually presented separately. These include the liberal theory of the individual (particularly individual freedom, feminist critiques and theories of subjectivity), globalization and global identity issues and the theory of human rights law, with the focus resting on human subjectivity and ethics. While the focus is on Anglo-American jurisprudence, this is combined with continental philosophy, international human rights issues and a Yugoslav war crimes case study.

'Jill Marshall's book is an important contribution to the revival of a sympathetic feminist engagement with liberal theory…Drawing on an impressive range of sources, Marshall puts the case for a liberal individualism which places the social construction of personhood and autonomy at its core…Marshall's cogent synthesis of existing arguments brings a fresh impetus to the important field of feminist legal and political theory. It deserves to find an appreciative audience.' Nicola Lacey, London School of Economics and Political Science, UK (from the Foreword) 'Jill Marshall begins her authoritative book with the ever intriguing question from Robin West "What is a human being?" (p. 1). She goes on to answer it through her engagement with an impressive range of sources and scholars to conclude, hopefully, that "The only way to change ideas of the possible is to think th eimpossible, dream and form ideas and mobilize those into concrete changes."…having read her compelling book and embraced her theoretical stance, I echo her hope…' Journal of Law and Society

Dr Jill Marshall is a Lecturer at the Department of Law, Queen Mary University of London, UK.

The principal objective of this series is to encourage the publication of books which adopt a theoretical approach to the study of particular areas or aspects of law, or deal with general theories of law in a way which is directed at issues of practical, moral and political concern in specific legal contexts. The general approach is both analytical and critical and relates to the socio-political background of law reform issues. This series includes studies of all the main areas of law, presented in a manner which relates to the concerns of specialist legal academics and practitioners. Each book makes an original contribution to an area of legal study while being comprehensible to those engaged in a wide variety of disciplines. Their legal content is principally Anglo-American, but a wide-ranging comparative approach is encouraged and authors are drawn from a variety of jurisdictions.