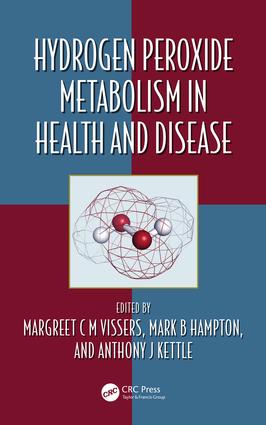 Much of the biology of oxidative stress and oxidative signalling centres on the generation and handling of hydrogen peroxide. The overall aim for this book would be to provide an insightful and useful forum to assist with the understanding of the relevance of hydrogen peroxide generation and how this is managed in human biology. The target audience would be those who currently have an interest in the generation of ROS, but who do not have expertise in chemistry, as well as those experts in the chemistry of oxidative stress, but without detailed understanding of the biologically relevant setting. We would aim to bridge the gap in understanding between chemistry and biology.

University of Otago in Christchurch, New Zealand. She is also the Associate Dean of Research at the University of Otago. Her research is devoted to the role of reactive oxidants in biological systems, the consequences of their formation and the effects they initiate in cell signaling, as well as the protection offered by antioxidants. She is also interested in the ways in which neutrophils cause injury to cells and tissues in the process of acute inflammation and infection, and the contribution of neutrophil-derived oxidants and proteinases to the resulting pathology. A focus of this research has been the toxicity of hypochlorous acid (HOCl) and hypobromous acid (HOBr), major oxidants produced by neutrophils, and the effects of chloramines and bromamines which are derived from them. She has shown that these oxidants initiate cell stress signaling responses and death pathways including apoptosis. Vissers is the author or co-author of more than 100 peer reviewed journal articles, book chapters and coference proceedings. Mark Hampton and Tony Kettle are also both professors at University of Otago in Christchurch.