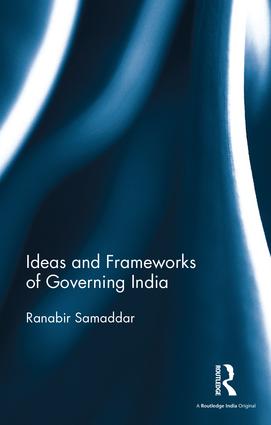 Ideas and Frameworks of Governing India

In breaking new ground in the study of what constitutes the political subject, these volumes will be indispensable to scholars, researchers and students of politics, public administration, development studies, South Asian studies and modern India.

Preface. Part I. Ideals of Governance 1. Radicalism, Violence, and the Task of Governing 2. Crisis in the Nationalist Ideal of Self-Governance 3. The Power of the Aesthetic and a Different Style of Governing the Self 4. Another Idea of Democratic Governance 5. Citizen as a Problem Figure for Governance 6. The Religious Nature of Our Ways of Governing Part II. Law and Regulations as the Framework of Governance 7. Rule of Law in a Society of Unrest 8. Riot, Police, and the City 9. Two Constitutional Tasks of Setting up a State and a Government 10. Legitimacy of the Constitution as a Living Document Bibliography

Ranabir Samaddar is the Distinguished Chair in Migration and Forced Migration Studies at Calcutta Research Group, India. Among foremost critical theorists, he has worked extensively on issues of forced migration, dialogue, nationalism and post-colonial statehood in South Asia, and new regimes of technological restructuring and labour control. His significant interventions on justice, rights, peace, nation-state and critical post-colonial thought include The Politics of Dialogue (2004), The Materiality of Politics (2007), and The Emergence of the Political Subject (2009). His co-authored work Beyond Kolkata: Rajarhat and the Dystopia of Urban Imagination (2013) examines new town and accumulation in the context of urban postcolonial capitalism. His co-edited volumes include Political Transition and Development Imperatives in India (2012), New Subjects and New Governance in India (2012) and Conflict, Power, and the Landscape of Constitutionalism (2008).