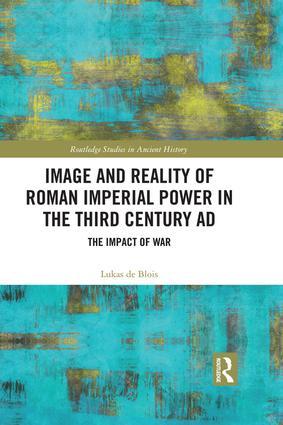 The Impact of War, 1st Edition

Image and Reality of Roman Imperial Power in the Third Century AD focuses on the wide range of available sources of Roman imperial power in the period AD 193-284, ranging from literary and economic texts, to coins and other artefacts. This volume examines the impact of war on the foundations of the economic, political, military, and ideological power of third-century Roman emperors, and the lasting effects of this. This detailed study offers insight into this complex and transformative period in Roman history and will be a valuable resource to any student of Roman imperial power.

"Professor De Blois, long recognized as a leader in the area of Roman History, has produced an admirably clear analysis of the complex third century AD. The argument is clear and original, the study of how a new, professional administrative class saved a state that had lost direction and imagination will resonate with readers whose interests range well beyond the history of Ancient Rome."

"Whether in legal, military, political, or economic matters, there can hardly be a scholar more qualified to venture an opinion, let alone produce a definitive statement, on the situation in the third century CE than Lukas de Blois … De Blois has crafted a fascinating approach to the third century that makes the most of his undeniable expertise. The book will be of interest to any who wish to gain a more comprehensive understanding of the period, have an interest in imperial power, or to specialists in the period’s political, military, economic, or ideological history."

3.5 Debasement of the imperial coinage

5.3 A permanent potential for victory

Lukas de Blois is Emeritus Professor of Ancient History at Radboud University at Nijmegen in The Netherlands. He published books and articles on the history of the Roman Empire in the third century AD, the history of the Late Roman Republic, ancient historiography (Sallust, Tacitus, Cassius Dio), Plutarch’s biographies, and Greek Sicily in the fourth century BC. He also published a manual, together with Bert van der Spek (L. de Blois & R.J. van der Spek, Introduction to the Ancient World 3rd edition, Routledge, forthcoming).