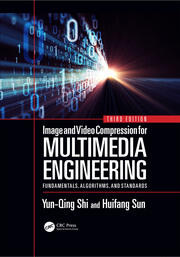 The latest edition provides a comprehensive foundation for image and video compression. It covers HEVC/H.265 and future video coding activities, in addition to Internet Video Coding. The book features updated chapters and content, along with several new chapters and sections. It adheres to the current international standards, including the JPEG standard.

Huifang Sun received the B.S. degree in Electrical Engineering from Harbin Engineering Institute (Harbin Engineering University now), Harbin, China in 1967, and the Ph.D. degree in Electrical Engineering from University of Ottawa, Ottawa, Canada. In 1986 he jointed Fairleigh Dickinson University, Teaneck, New Jersey, as an Assistant Professor and promoted to an Associate Professor in 1990. From 1990 to 1995 he was with the David Sarnoff Research Center (Sarnoff Corp), Princeton, New Jersey, as a member of technical staff and later promoted to Technology Leader of Digital Video Technology. He joined Mitsubishi Electric Research Laboratories (MERL), in 1995 as a Senior Principal Technical Staff and was promoted as Deputy Director in 1997, Vice President and MERL Fellow in 2003 and now as MERL Fellow. He holds 66 U.S. patents and has authored or co-authored 2 books as well as more than 150 journal and conference papers. For his contributions on HDTV development he obtained 1994 Sarnoff technical achievement award. He also obtained the best paper award of IEEE Transactions on Consumer Electronics in 1993, the best paper award of International Conference on Consumer Electronics in 1997 and the best paper award of IEEE Transaction on CSVT in 2003. He was an Associate Editor for IEEE Transaction on Circuits and Systems for Video Technology and the Chair of Visual Processing Technical Committee of IEEE Circuits and System Society. He is an IEEE Life Fellow. He also served as a guest professor of Peking University, Tianjin University, Shanghai Jiaotong University (Guest Researcher) and several other universities in China.

Dr. Yun Qing Shi has been a professor with the Department of Electrical and Computer Engineering at the New Jersey Institute of Technology (NJIT), Newark, NJ since 1987. He has authored and co-authored more than 300 papers in his research areas, a book on Image and Video Compression, three book chapters on Image Data Hiding, one book chapter on Steganalysis, and one book chapter on Digital Image Processing. He has edited more than 10 proceedings of international workshops and conferences, holds 29 awarded US patents, and delivered more than 120 invited talks around the world. He is a member of IEEE Circuits and Systems Society (CASS)'s Technical Committee of Visual Signal Processing and Communications, Technical Committee of Multimedia Systems and Applications, an associate editor of IEEE Transactions on Information Forensics and Security, and a fellow of IEEE for his contribution to Multidimensional Signal Processing since 2005.