Immanence and the Animal
A Conceptual Inquiry 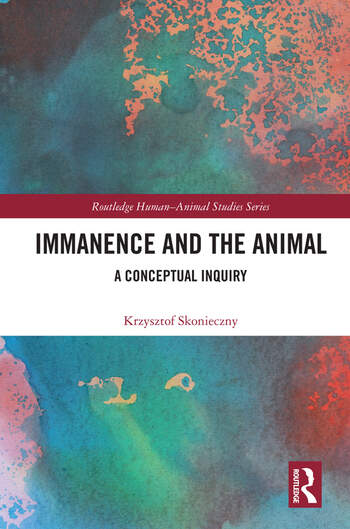 Immanence and the Animal: A Conceptual Inquiry

Following Deleuze and Guattari’s notion that philosophy is a discipline of creating concepts, this book traces how the concept of the animal was created in the history of philosophy through re-reading the works of Descartes, Kant, Heidegger, Derrida and Levinas. Their theories show that the concept of the animal was constructed on the "plane of transcendence" as subservient to the self-serving human, who represents the animal as a negative entity devoid of reason, ethics, the ability to enter into political alliances or even die. With this perspective and a range of theories from thinkers such as Spinoza, Nancy, Haraway and Braidotti as the groundwork, a new positive concept of the animal, operating on the plane of immanence, is sketched out, compelling a reappraisal of the relationships between body and thought, ethics and politics, or life and death.

With comprehensive interpretations of the views of several key philosophers, from Kant and Heidegger to Deleuze, Derrida and Agamben, this book will be valuable for scholars of theoretical animal studies and continental philosophy interested in the philosophical significance of the animal question.

Acknowledgements; Introduction; 1. Philosophical Zoology. Why philosophers still believe in the human-animal caesura; 2. Polemology. The animal as a philosophical concept and how that influences infra- and interdisciplinary discussion; 3. Anatomy. What is the concept of man made of?; 4. Anthropology. Several instances of how the concept of the human has been established on a plane of transcendence; 5. False Immanence. Why philosophy presents a negative vision of the animal; 6. Radical Immanence. Recreating the concept of the animal; 7. Uses of Immanence. Conclusions and remarks on practice; Bibliography; Index

Krzysztof Skonieczny is Assistant Professor at the Faculty of "Artes Liberales," University of Warsaw. His interests include animal studies, political philosophy and the question of atheism. He coedited (with Szymon Wróbel) Atheism Revisited. Rethinking Modernity and Inventing New Modes of Life (2020).