Immigrant Enterprise in Europe and the USA 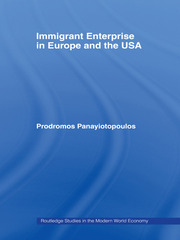 Immigrant Enterprise in Europe and the USA

Immigrant-owned enterprises are a highly visible phenomenon, but frequently and increasingly so after 9/11, immigration has been cast in pessimistic and apocalyptic terms which became associated with rising xenophobia and restrictive legislation, such as the Patriot Act in the United States. This book examines the issue of immigration and the contribution immigrant enterprise plays in the economic development of gateway cities such as London, New York, Los Angeles, Paris, Amsterdam and Miami, cities which appear as the living embodiment of globalization.

Questioning the extent to which cities are transformed by immigrants themselves, ‘from below’, this revealing book points to relationships with wider processes, such as the legal and political framework and the restructuring by capital of particular industries and localities. What happens to immigrants is shaped by membership of particular groups, historical circumstances, and the reproduction of social stratification rooted in class, gender, race, age. The book points to the development of social and economic differentiation, and challenges popular stereotypes of immigrants in business. Its findings point to a highly differentiated enterprise structure.

This informative volume contains rich case study material. Ideal for students and professionals, it demonstrates that the recognition of diversity is a necessary first step to understanding winners and losers in immigrant enterprise.