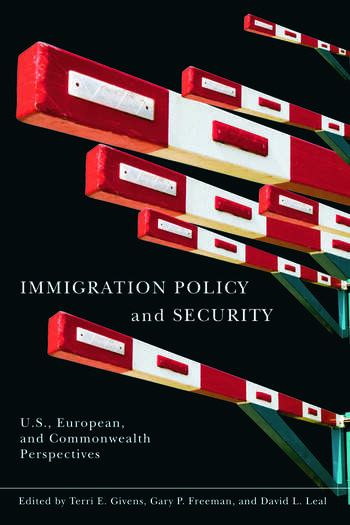 Immigration policy in the United States, Europe, and the Commonwealth went under the microscope after the terror attacks of 9/11 and the subsequent events in London, Madrid, and elsewhere. We have since seen major changes in the bureaucracies that regulate immigration—but have those institutional dynamics led to significant changes in the way borders are controlled, the numbers of immigrants allowed to enter, or national asylum policies? This book examines a broad range of issues and cases in order to better understand if, how, and why immigration policies and practices have changed in these countries in response to the threat of terrorism. In a thorough analysis of border policies, the authors also address how an intensification of immigration politics can have severe consequences for the social and economic circumstances of national minorities of immigrant origin.

Terri E. Givens is Vice Provost and Associate Professor of Government at the University of Texas at Austin.

Gary P. Freeman is Professor and Chair of the Department of Government at the University of Texas at Austin.

David L. Leal is Associate Professor of Government and Director of the Public Policy Institute at the University of Texas at Austin.

"Immigration Policy and Security is a thought provoking, intellectually balanced, and impressively comprehensive take on the security implications of immigration in a post-September 11th world. For serious students of the subject its appearance could not be timelier or its contributions more welcome."

"Immigration Policy and Security offers thoughtful analyses of how national security concerns that emerged after the September 11, 2001 attacks have shaped immigration and asylum policies in Western democracies. The strengths of the volume are several. Most importantly, it is broadly comparative. The authors are also attentive to changes and continuities in immigration policies in light of newer national security concerns; they provide a rich, textured analysis on the debate over the seriousness of the threat to national security posed by immigration; and they are attentive to varied national origin and legal compositions of migrations to different countries and the degree to which these differences shape national policies. Immigration Policy and Security is particularly attentive to national responses to Muslim immigrants, but also to unauthorized migrants who are to some degree outside the state’s regulatory regime."

"The tragedy of 9/11 had sharp repercussions on global mobility and America's immigration system. The authors in this volume uncover what policymakers did right and much that they did wrong. This is valuable reading for anyone who wants to parse the rhetoric over immigration restrictions and the terrorism menace."

"This excellent collection brings evidence to bear on many of our assumptions about the direction of immigration policies since 9/11. Some are true and others false, it turns out. The authors cover all the main areas of policy-making, from privacy concerns related to international enforcement coordination to the impact of security concerns on Muslims. The chapters are very readable and terrific for course adaptation."

"A top quality line-up of contributors provide important insight into our understanding of the contemporary dynamics of post 9/11 migration politics and policy-making. The comparative reach, conceptual insight and wealth of empirical detail make this a major contribution to the field that deserves the attention of all those with an interest in these important issues."

--Andrew Geddes, The University of Sheffield