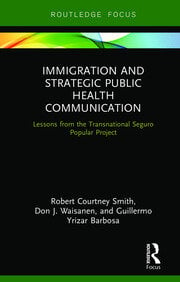 Drawing on original research with Mexican emigrants in New York and the Mexican government’s Seguro Popular health care program, the authors examine the ways in which governments integrate migrants into diasporic political, medical, educational, and other systems, and how migrant-sending countries communicate with their emigrants abroad. In analyzing how these efforts fail or succeed, this book presents strategies and policy recommendations that many governments and institutions can use to engage their citizens or clients ethically and effectively.

Offering a valuable approach to the study of race, migration, and public policy, this book will be of key importance to researchers and graduate students in public health, sociology, marketing and business, political science, Latinx studies, and international communication.

Robert Courtney Smith is a Professor in the Marxe School of Public and International Affairs at Baruch College, and the Sociology Department of The Graduate Center, City University of New York (CUNY). He wrote Mexican New York: Transnational Worlds of New Immigrants (2006), which won the 2008 Distinguished Book Award from the American Sociological Association and five other prizes. He was a Guggenheim Fellow and has been funded by the National Science Foundation, W.T.Grant foundation, Russell Sage Foundation, Social Science Research Council, and others. He serves as Board Chair of Masa (masany.org).

Don J. Waisanen is an Associate Professor in the Marxe School of Public and International Affairs at Baruch College, CUNY, where he teaches courses and workshops in public communication—including executive speech training, communication strategy, and seminars on leadership, storytelling, and improvisation. All his research projects seek to understand how communication works to promote or hinder the force of citizens’ voices, including his recent book, Political Conversion: Personal Transformation as Strategic Public Communication. He is the founder of Communication Upward (commupward.com), an adjunct lecturer at Columbia University and New York University, and received a PhD in Communication from the University of Southern California’s Annenberg School.

Guillermo Yrizar Barbosa is a PhD candidate in sociology at The Graduate Center, and data manager at Baruch College, CUNY. He has been (2018–2019) a research associate and coordinator for the Legislation and Migration Policy Observatory at El Colegio de la Frontera Norte in Tijuana, and a Visiting Research Fellow (2017–2018) at the Center for US-Mexico Studies, University of California, San Diego, School of Global Policy and Strategy. He was a fellow at the CUNY Institute for Demographic Research (2014–2017).