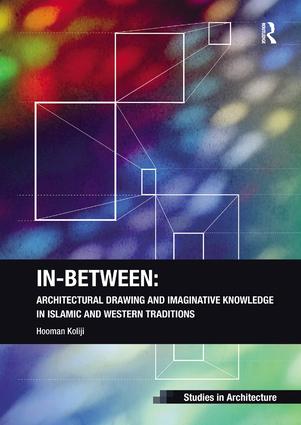 Contemporary technical architectural drawings, in establishing a direct relationship between the drawing and its object, tend to privilege the visible physical world at the expense of the invisible intangible ideas and concepts, including that of the designer’s imagination. As a result, drawing may become a utilitarian tool for documentation, devoid of any meaningful value in terms of a kind of knowledge that could potentially link the visible and invisible. This book argues that design drawings should be recognized as intermediaries, mediating between the world of ideas and the world of things, spanning the intangible and tangible. The notion of the 'Imaginal' as an intermediary between the invisible and visible is discussed, showing how architectural drawings lend themselves to this notion by performing as creative agents contributing not only to the physical world but also penetrating the realm of concepts. The book argues that this 'in-between' quality to architectural drawing is essential and that it is critical to perceive drawings as subtle bodies that hold physical attributes (for example, form, proportion, color), highly evocative, yet with no matter. Focusing on Islamic geometric architectural drawings, both historical and contemporary, it draws on key philosophical and conceptual notions of imagination from the Islamic tradition as these relate to the creative act. In doing so, this book not only makes important insights into the design process and act of architectural representation, but more broadly it adds to debates on philosophies of the imagination, linking both Western and Islamic traditions.

’Enquiring into the nature of the creative imagination, this book provides a clear alternative to the well-worn dualistic struggle between rationality and subjective aesthetics. Koliji makes a valuable contribution to the historical study of Islamic architecture, and further reveals an innovative way of approaching artworks through the viewpoint of the designer’s imagination that has broad relevance to anyone interested in understanding the process of invention.’ Paul Emmons, Virginia Tech, USA ’This book reinforces the novel directions in research that transcend the gaps in historical sources on art and architecture in the pre-modern Muslim milieu by engagingly intersecting the pathways of architectural humanities with Islamic studies in mainstream theory and discourse.’ Nader El-Bizri, American University of Beirut, Lebanon