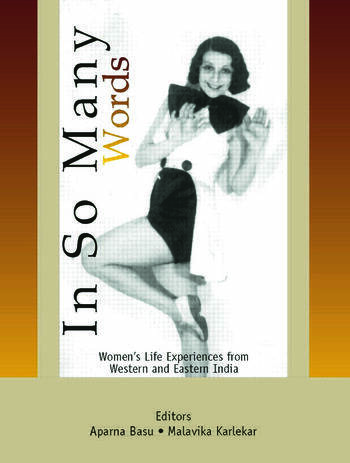 In So Many Words: Women’s Life Experiences from Western and Eastern India

This volume will mark a new trend in dealing with women’s varied experiences of life: individual introductions situate the narrator in a context – and then her voice takes over, with no intervention from the editors (except to provide footnotes wherever necessary).

The personal narrative — be it an autobiography, a letter or a diary — has come to be recognised as an acceptable data source in history and social science. Literary critics and students of literature too find considerable use in reading the personal writings of poets, fiction and crime writers. In this book, readings of personal narratives help in painting various images of lives that we can only know at second hand. The mélange includes memoirs, published articles, ‘portraits from memory’, a collection of essays , and an oral interview. In all, the self was the focus. The writings of Sailabala, Li Gotami, and Shakuntala go beyond a recounting of their lives and deal with spiritual and travel experiences. Three of the essays are excerpts from published autobiographies — Sarala Devi Chaudhurani’s Jeevaner Jharapata (Life’s Fallen Leaves), Kalpana Dutt’s Reminiscences and Sailabala Das’s A Look Before and After. Vidyagauri Nilkanth’s writings are essays and a selection of amazingly candid letters exchanged with her husband. Anasuya Sarabahi’s is an interview in Gujarati with niece Gira and Monica’s a selection from an unpublished memoir. Li Gotami, whose original name was Rutty Petit, travelled to Manasarovar, and a few of the magazine articles on this amazing journey have been reproduced here.

Whichever form a woman chooses, writing about her self, is emancipatory; she may be a person who has so far received little attention from the family or the world. Or she may be one who is a well-known public figure – yet little is known about her childhood. So she writes about many selves – life is not about one coherent self but rather one of many lives and experiences. In other words, the pen gives woman agency – she moves out from under the shroud of victim hood and becomes one who can write about her lives.

The volume also has some carefully chosen photographs, gleaned from personal collections, so far a neglected area of use in academic study. These provide an important visual context to the many worlds that the women inhabited.

Aparna Basu is currently Patron of the All-India Women’s Conference, and Chairperson, Lakshmibai College, Unversity of Delhi. Her publications include Growth of Education and Political Development in India, 1898-1920 (1974); and A Rebel With a Cause: Mridula Sarabhai (1996).

Malavika Karlekar is Editor of Indian Journal of Gender Studies. Her publications include Poverty and Women’s Work: A Study of Sweeper Women in Delhi (1982); Voices from Within: Early Personal Narratives of Bengali Women (1991); Re-Visioning the Past: Early Photography in Bengal, 1875-1915 (2005).