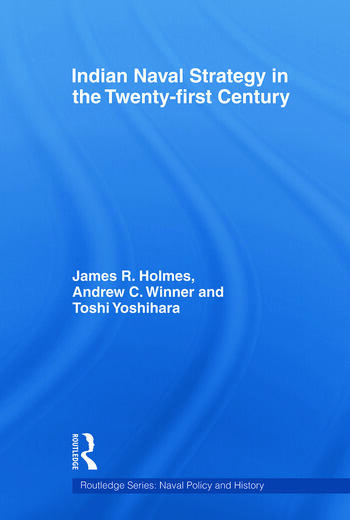 This is the first academic study of India's emerging maritime strategy, and offers a systematic analysis of the interplay between Western military thought and Indian maritime traditions.

By a quirk of historical fate, Europe embarked on its Age of Discovery just as the main Asian powers were renouncing the sea, ushering in centuries of Western dominance. In the 21st century, however, Asian states are once again resuming a naval focus, with both China and India dedicating some of their new-found wealth to building powerful navies and coast guards, and drawing up maritime strategies to govern the use of these forces. The United States, like the British Empire before it, is attempting to manage these rising sea powers while preserving its maritime primacy.

This book probes how India looks at the sea, what kind of strategy and seagoing forces New Delhi may craft in the coming years, and how Indian leaders may use these forces. It examines the material dimension, but its major premise is that navies represent a physical expression of a society's history, philosophical traditions, and culture. This book, then, ventures a comprehensive appraisal of Indian maritime strategy.

This book will be of interest to students of sea power, strategic studies, Indian politics and Asian Studies in general.

1. Everything Old Is New Again  2. The Logic of Indian Maritime Identity  3. The American Precedent for Indian Strategy  4 The Grammar of Sea Power: India’s Maritime Doctrine and Strategy  5. Indian Conventional Naval Capabilities  6. Indian Nuclear Maritime Strategy and Capabilities  7. The U.S. Maritime Strategy and India: Foundation for a Maritime Entente?  8. China Turns to the Indian Ocean  9. The Influence of Other Regional Factors  10. India and the Commons: Nehru’s Logic, Kautilya’s Grammar?  Bibliography