Indians of the Great Plains 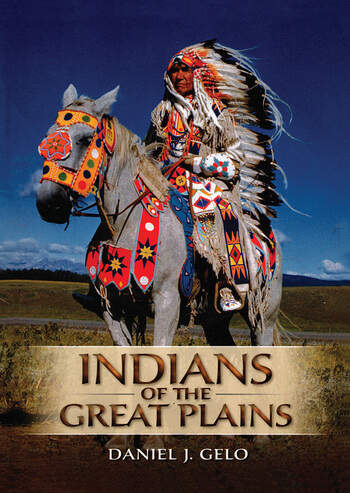 Indians of the Great Plains

Plains Societies and Cultures
Indians of the Great Plains, written by Daniel J. Gelo of The University of Texas at San Antonio, is a text that emphasizes that Plains societies and cultures are continuing, living entities.
Through a topical exploration, it provides a contemporary view of recent scholarship on the classic Horse Culture Period while also bringing readers up-to-date with historical and cultural developments of the 20th and 21st centuries.  In addition, it contains wide and balanced coverage of the many different tribal groups, including Canadian and southern populations.

Daniel J. Gelo is Professor of Anthropology and Dean of the College of Liberal and Fine Arts at the University of Texas at San Antonio, where he has taught and researched since 1988. Gelo holds Ph.D., M.Phil. M.A., and B.A. degrees in anthropology from Rutgers University. His scholarship concerns cognitive anthropology and the symbolic analysis of expressive forms such as myth, ritual, language, music, and visual materials. He is a recognized authority on the culture of the Plains Indians and has conducted fieldwork with the Comanche people of southwest Oklahoma since 1982. Gelo is also the only anthropologist to have conducted fieldwork in all four main Indian communities in Texas: the Tigua, Kickapoo, and Alabama-Coushatta reservations, and the urban Indian enclave in Dallas.
His publications include Comanche Vocabulary (University of Texas Press, 1995), Comanches in the New West, 1896-1908 (with Stanley Noyes, University of Texas Press, 1999), and Texas Indian Trails (with Wayne L. Pate, Republic of Texas Press, 2003). Other publications include articles, commentary, and reviews for the American Indian Quarterly, Journal of American Folklore, Southwestern Historical Quarterly, Visual Anthropology Review, Western Folklore, Ethnohistory, Plains Anthropologist, Current Anthropology, Great Plains Research Ethnomusicology, American Anthropologist, and the Journal of American History, as well as the article on Native North Americans in the Encyclopedia of Cultural Anthropology and the premier entry on the Comanches in the Human Relations Area Files. Gelo researched and co-wrote three award-winning film documentaries on Texas Indians for public television: Circle of Life: The Alabama-Coushatta Indians (1991); Big City Trail: The Urban Indians of Texas (1992); and People of the Sun: The Tiguas of Ysleta (1992). Gelo is also the only anthropologist to co-author a national elementary textbook series, contributing to six national and state social studies texts for grades 3-6 published by Silver Burdett Ginn in 1997. His work has been funded by the Wenner-Gren Foundation for Anthropological Research, Inc., the National Endowment for the Humanities, and Humanities Texas. Professional affiliations include the Council of Colleges of Arts and Sciences, American Folklore Society, American Society for Ethnohistory, and Plains Anthropological Society. Among his recognitions, Gelo was a Henry Rutgers Scholar and was named Ambassador to the Comanche Nation; he has won the UTSA President's Distinguished Achievement Award for Creative Activity and the University of Texas System Chancellor's Council Outstanding Teaching Award.