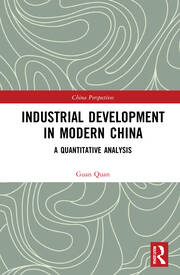 The book studies the process of economic and industrial development in the Republic of China (1912-1949), in the hope of shedding light on how China came to be a comparative economic laggard in the period, especially in comparison to Japan.
Backing up by a large amount of industrial statistical data gathered and rigorously analyzed by the author, the book stands out from previous research that has been limited to theoretical inferences and general judgments with scarce empirical evidence. So, far from being a pure historical review of China's industrial development, the book focuses on the internal logic of economic phenomena, especially the relationship among economic variables reflected in economic data, and carries out discussions within the framework of economic development theory. The author uses multivariate statistical analysis to draw comparisons between the industrial development of China and that of Japan, focusing on outbound investment and the importance of this for economic growth.
The book will appeal to academics and general readers interested in economic development and the modern economic history of East Asia, development economics, as well as industrial and technological history.

Guan Quan is a Professor in the School of Economics at Renmin University of China.