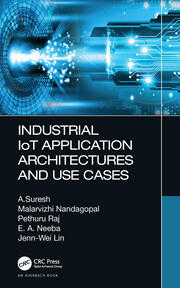 As the number of Internet of Things (IoT) elements grows exponentially, their interactions can generate a massive amount of raw and multi-structured data. The challenge with this data explosion is to transform any raw data into information and knowledge, which can be used by people and systems to make intelligent decisions. Industrial IoT Application Architectures and Use Cases explores how artificial intelligence (AI), data analytics, and IoT technology combine to promote intelligent decision-making and automation in a range of industries.

With faster, more stable AI algorithms and approaches, knowledge discovery and dissemination from IoT-device data can be simplified and streamlined. An era of powerful cognitive technology is beginning due to cloud-based cognitive systems that are forming the foundation of game-changing intelligent applications. This book presents next-generation use cases of IoT and IoT data analytics for a variety of industrial verticals as given below:

This book also includes a chapter on the IoT paradigm and an overview of uses cases for personal, social, and industrial applications.

Dr. N. Malarvizhi, B.E., M.E., PhD currently working as the Professor in the Department of Computer Science and Engineering at Vel Tech Rangarajan Dr. Sagunthala R&D Institute of Science and Technology, Chennai-62, Tamilnadu, India. She is having more than 18 years of teaching experience. She has written a book titled "Computer Architecture and Organization", Eswar Press, The Science and Technology Book Publisher, Chennai. She serves as a reviewer for many reputed journals. She has published numerous papers in International Conferences and Journals. Her area of interest includes Parallel and Distributed Computing, Grid Computing, Cloud Computing, Big Data Analytics, Internet of Things, Computer Architecture and Operating Systems. She is a life member of Computer Society of India (CSI), Indian Society for Technical Education (ISTE), IARCS and IAENG. She is a Senior Member of IEEE and IEEE Women in Engineering (WIE). She is a Member of Association for Computing Machinery (ACM) and The Institution of Engineering and Technology (IET).

Dr. A. Suresh B.E., M.Tech., Ph.D works as the Professor & Head, Department of the Computer Science and Engineering in Nehru Institute of Engineering & Technology, Coimbatore, Tamil Nadu, India. He has been nearly two decades of experience in teaching and his areas of specializations are Data Mining, Artificial Intelligence, Image Processing, Multimedia and System Software. He has published two patent and 85 papers in International journals. He has published 5 chapters in the book title An Intelligent Grid Network Based on Cloud Computing Infrastructures in IGI Global Publisher. He has published more than 40 papers in National and International Conferences. He has served as a editor / reviewer for Springer, Elsevier, Wiley, Inderscience journals etc... He is a member of ISTE, MCSI, IACSIT, IAENG, MCSTA and Global Member of Internet Society (ISOC). He has organized several National Workshop, Conferences and Technical Events. He is regularly invited to deliver lectures in various programmes for imparting skills in research methodology to students and research scholars. He has published four books, in the name of Data structures & Algorithms, Computer Programming, Problem Solving and Python Programming and Programming in "C" in DD Publications, Excel Publications and Sri Maruthi Publisher, Chennai, respectively. He has hosted two special sessions for IEEE sponsored conference in Osaka, Japan and Thailand.

Dr. E. A. Neeba, currently working as an Assistant Professor in the Department of Information Technology at Rajagiri School of Engineering & Technology, Kochi, Kerala, which is affiliated to the A.P.J Abdul Kalam Technological University, Kerala. She received her doctoral degree from Vel Tech Rangarajan Dr. Sagunthala R&D Institute of Science and Technology, Chennai, Tamil Nadu. She completed her Masters in Computer Science & Engineering from SRM Institute of Science and Technology, Chennai. Her research interests include Analysis of data, Data Mining and Big Data, knowledge representation, and ontology, both from the theoretical perspective and their application to natural language understanding, reasoning, information visualization, and interoperability. Having a rich industrial experience of around 10 years prior to joining academia, and also she has publications in around 10 SCI/ SCIE/Scopus indexed international journals and a few national journals. An active participant in various conferences and workshops on data mining, she is currently involved in several projects in this field. She was entrusted with leadership positions such as the Accreditation coordinator for the college, and Head of the Quality Cell, besides organizing various national and international events.

Dr. Pethuru Ra Chelliah has been working as the chief architect in the Site Reliability Engineering (SRE) Center of Excellence, Reliance Infocomm Ltd. (RIL), Bangalore. He previously worked as a cloud infrastructure architect in the IBM Global Cloud Center of Excellence (CoE), IBM India Bangalore for four years. Prior to that, He had a long stint as TOGAF-certified enterprise architecture (EA) consultant in Wipro Consulting Services (WCS) Division. He also worked as a lead architect in the corporate research (CR) division of Robert Bosch, Bangalore. In total, He have gained more than 17 years of IT industry experience and 8 years of research experience. He obtained his PhD through CSIR-sponsored PhD degree in Anna University, Chennai and continued the UGC-sponsored postdoctoral research in the department of Computer Science and Automation, Indian Institute of Science, Bangalore. Thereafter, He was granted a couple of international research fellowships (JSPS and JST) to work as a research scientist for 3.5 years in two leading Japanese universities. Regarding the publications, He have published more than 30 research papers in peer-reviewed journals such as IEEE, ACM, Springer-Verlag, Inderscience, etc. He have authored 7 books thus far and He focus on some of the emerging technologies such as IoT, Cognitive Analytics, Blockchain, Digital Twin, Docker-enabled Containerization, Data Science, Microservices Architecture, etc. He have contributed 25 book chapters thus far for various technology books edited by highly acclaimed and accomplished professors and professionals. The CRC Press, USA had also released his first book titled as "Cloud Enterprise Architecture" in the year 2012 and you can find the book details in the page http://www.crcpress.com/product/isbn/9781466502321 He has edited and authored a book on the title" Cloud Infrastructures for Big Data Analytics" published by IGI International USA in March 2014. A new book on the title" Smarter Cities: the Enabling Technologies and Tools" by CRC Press, USA, is to hit the market in the month of June 2015. He has collaborating with a few authors to publish a book on the title "High-Performance Big Data Analytics" to be published by Springer-Verlag in the year 2015.

Dr. Jenn-Wei Lin received the M.S. degree in computer and information science from National Chiao Tung University, Hsinchu, Taiwan, in 1993, and the Ph.D. degree in electrical engineering from National Taiwan University, Taipei, Taiwan, in 1999. He was a Researcher with Chunghwa Telecom Co., Ltd., Taoyuan, Taiwan, from 1993 to 2001. He is currently a Full Professor with the Department of Computer Science and Information Engineering, Fu Jen Catholic University, Taiwan. His current research interests include cloud computing, mobile computing and networks, distributed systems, and fault-tolerant computing.