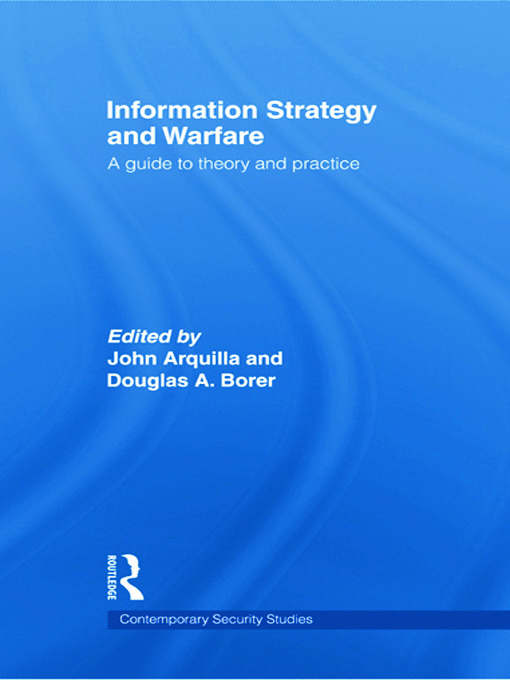 A Guide to Theory and Practice, 1st Edition

This volume develops information strategy as a construct equal in importance to military strategy as an influential tool of statecraft.

Information Strategy and Warfare will be essential reading for students and practitioners of information strategy, as well as scholars of security studies and military strategy in general.

Introduction: The Rise of Information Strategy Part 1: Confronting Terror and Insurgency 1. The War of Ideas and the Idea of War 2. Thinking about Al Qaeda as a Global Tribe 3. Influence Strategies in Iraq and Beyond 4. Muslim Insurgencies and the Future of Iraq Part 2: Improving Information Strategy 5. Public Diplomacy 6. Strategic Assessment and Information Warfare 7. Rebuilding a Capacity for Deception: The '1% Solution' 8. The Trouble with Psychological Operations 9. Conclusion

John Arquilla is Professor of Defense Analysis at the Naval Postgraduate School in Monterey, California. He is the author of Lessons from the War with Saddam Hussein (RAND, 1991), Dubious Battles (Crane Russak, 1992), and From Troy to Entebbe (University Press of America, 1996), as well as many articles, book chapters, and monographs on topics in security affairs. He is best known for his collaborative RAND studies with David Ronfeldt, notably Cyberwar is Coming! (1993) and The Advent of Netwar (1996).

Douglas A. Borer is an Associate Professor in the Department of Defense Analysis at the Naval Postgraduate School in Monterey. He co-edited with Mark T. Berger The Rise of East Asia: Critical Visions of the Pacific Century (Routledge, 1997) and authored Superpowers Defeated: Vietnam and Afghanistan Compared (Frank Cass, 1999).