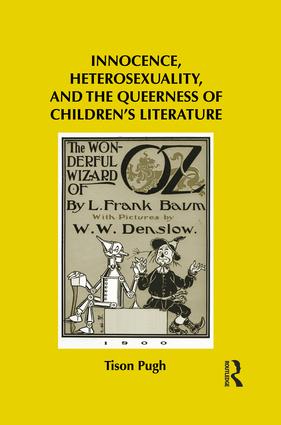 Innocence, Heterosexuality, and the Queerness of Children's Literature

Innocence, Heterosexuality, and the Queerness of Children’s Literature examines distinguished classics of children’s literature both old and new—including L. Frank Baum’s Oz books, Laura Ingalls Wilder’s Little House series, J. K. Rowling’s Harry Potter novels, Lemony Snicket’s A Series of Unfortunate Events, and Stephenie Meyer’s Twilight series—to explore the queer tensions between innocence and heterosexuality within their pages. Pugh argues that children cannot retain their innocence of sexuality while learning about normative heterosexuality, yet this inherent paradox runs throughout many classic narratives of literature for young readers. Children’s literature typically endorses heterosexuality through its invisible presence as the de facto sexual identity of countless protagonists and their families, yet heterosexuality’s ubiquity is counterbalanced by its occlusion when authors shield their readers from forthright considerations of one of humanity’s most basic and primal instincts.

The book demonstrates that tensions between innocence and sexuality render much of children’s literature queer, especially when these texts disavow sexuality through celebrations of innocence. In this original study, Pugh develops interpretations of sexuality that few critics have yet ventured, paving the way for future scholarly engagement with larger questions about the ideological role of children's literature and representations of children's sexuality.

Tison Pugh is Associate Professor in the Department of English at the University of Central Florida. He is the author of Queering Medieval Genres and Sexuality and Its Queer Discontents in Middle English Literature and has published on children’s literature in such journals as Children’s Literature, The Lion and the Unicorn, and Marvels and Tales.

"In shifting the focus from the queerness of same-sex relations to that of an impending heterosexuality for most children, Pugh's book makes a unique and provocative contribution to the conversation about the queer child." - Eric L. Tribunella, Children's Literature Association Quarterly

Tison Pugh is Professor in the Department of English at the University of Central Florida. He is the author of Queering Medieval Genres and Sexuality and Its Queer Discontents in Middle English Literature and has published on children’s literature in such journals as Children’s Literature, Children’s Literature Association Quarterly, The Lion and the Unicorn, and Marvels and Tales.