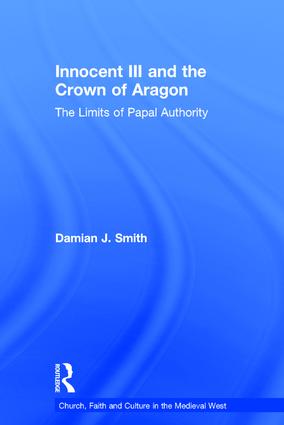 Innocent III and the Crown of Aragon

Drawing on an extensive study of the primary sources, Damian Smith explores the relationship between the Roman Curia and Aragon-Catalonia in the late 12th and early 13th centuries. His focus is the pontificate of Innocent III, the most politically influential medieval Pope, and the reign of King Peter II of Aragon and the first years of King James I. By analysing the practical example of papal actions towards one of its closest secular allies, the work deepens our understanding of the objectives and limits of the Papacy, while making clear the Pope's profound influence on the realm's political development. Marriage affairs and politics, the Spanish Reconquista, with the campaign of Las Navas, and the Albigensian Crusade, in which King Peter met his death at the battle of Muret, are all covered. The final chapters turn more specifically to Church affairs, looking at the relations between the papacy and the bishops of the province of Tarragona, and at the success of Innocent III's mission to reform religious life.

'… for scholars of the Middle Ages in general and of the medieval church in particular, this work provides crucially important but seldom seen documentation from many national, municipal, clerical, and university depositories. That fact alone recommends Smith's book to a greater number of specialists in medieval studies.' Speculum 'This well-written book is a very fine piece of scholarship. The research is thorough and the conclusions well balanced and convincing. The author has provided a valuable tool for students of the papacy and of Spain and for anyone else interested in European history during the early thirtheenth century.' The Medieval Review '… the whole book is solidly based on contemporary sources…' Ecclesiastical History ’Smith has made a worthwhile contribution to our literature on Innocent III. He has also added to our understanding of the problems faced by the emerging kingdom of Aragon during this very difficult period.’ Crusades

Contents: Introduction; Political relations (1198-1204); The coronation of the king; The Albigensian Crusade; From Las Navas to Muret; The minority of James I; The pope and the bishops; The pope as judge; The reform of the religious life; Conclusion; Documents; Bibliography; Index.

Dr Damian J. Smith is the author (with Helena Buffery) of 'The Book of Deeds of James I of Aragon: A translation of the medieval Catalan Llibre dels Fets', also published by Ashgate, and is Associate Professor in the Department of History at St Louis University, USA.

The series Church, Faith and Culture in the Medieval West reflects the central concerns necessary for any in-depth study of the medieval Church - greater cultural awareness and interdisciplinarity. Including both monographs and edited collections, this series draws on the most innovative work from established and younger scholars alike, offering a balance of interests, vertically through the period from c.400 to c.1500 or horizontally across Latin Christendom. Topics covered range from cultural history, the monastic life, relations between Church and State to law and ritual, palaeography and textual transmission. All authors, from a wide range of disciplinary backgrounds, share a commitment to innovation, analysis and historical accuracy.