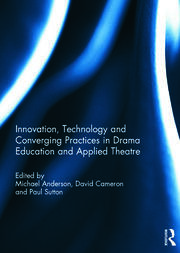 This edition collection showcases the increasing intersections between drama and applied theatre, education, innovation and technology. It tunes in to the continuing conversation that has been a persistent if not prominent feature of our drama education since the advent of accessible computer based technologies. The chapters in this book consider how technology can be used as a potent tool in drama learning and how the learning is changing the technologies and in turn how learning is transforming the technology. This collection includes contributions from leading scholars in the field on a range of topics including digital storytelling and identity formation, applied drama and micro-blogging and the use of Second Life in drama learning. The chapters provide a potent collection for researchers and educators considering the role of technology in drama education spaces.

This book was originally published as a special issue of RiDE: The Journal of Applied Theatre and Performance.

Michael Anderson is an associate professor in the Faculty of Education and Social Work at The University of Sydney, Australia. His research and teaching concentrates on how arts educators begin, evolve and achieve growth in their careers and how students engage with arts and technology to learn and create in arts education. This work has evolved into a program of research and publication that engages with arts classrooms directly. His recent publications explore how aesthetic education is changing in the 21st Century. These publications include Partnerships in Education Research: Creating Knowledge that Matters (with Kelly Freebody, 2014),Masterclass in Drama Education (UK),Teaching the Screen, Film Education for Generation Next (with Miranda Jefferson), Drama with Digital Technology (with John Carroll and David Cameron, 2009) and Real Players: Drama, Education and Technology (with John Carroll and David Cameron Trentham, 2006).

is Deputy Director of Academic Technologies, the University of Newcastle, Australia. David's research interests are in the areas of drama, digital games, social media and mobile technology. His PhD explored the similarities between some forms of educational drama and digital game-based learning. David has a professional and teaching background in media and communication, including radio journalism and community broadcasting.

is the Artistic Director of C&T. Mixing applied theatre and digital media, C&T create collaborative online drama projects for schools, colleges and universities. Examples of these projects include the Livingnewspaper.net – a reinvention of the classic documentary form of the Living Newspaper for the internet age, allowing young people to make drama about issues that matter to them, Stratar.net a performance-based digital mapping tool, and Lip Sync where young people use popular music to create ethnographic music videos. Together these schools and projects form the C&T Network: a sequence of partnerships linking schools in the UK, New York, Washington DC, Nairobi, Beijeng and Tokyo enabling young people to collaborate in creating drama that connects with their lives, cultures and aspirations.

Working predominantly through practiced-based research, Paul’s interests reflect those of C&T, exploring the synergies that can be built between drama, performance and digital technologies and the potential for learning and development that can be achieved through this work in an age of increasing globalisation. This work embraces process drama, social media, augmented reality, theatre for development, docu-drama and psycho-geography.

Paul is Multi-Media Editor of RiDE: the Journal of Applied Theatre and Performance and an Artistic Assessor for Arts Council England, for whom he acts as an advisor on digital media.