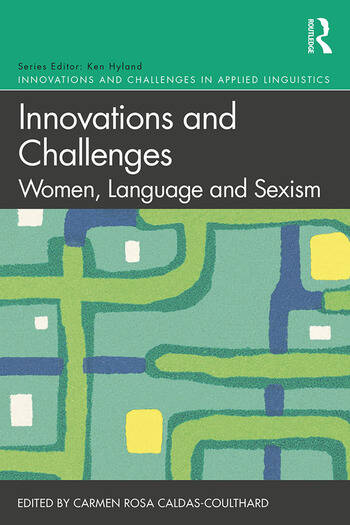 Innovations and Challenges: Women, Language and Sexism brings together an outstanding collection of essays from internationally recognised researchers to recontextualise some of the questions raised by feminist thinkers 40 years ago. By taking linguistically mediated violence as a central topic, this collection’s main objective is to explore the different and subtle ways sexism and violence are materialised in discursive practices. In doing so, this book:

revisits the initial questions posed by the first feminist linguists – where, when and how are women discriminated against and why, in postmodern societies, is there so much sexism in all realms of social life? This book is essential reading for those studying and researching gender across a wide range of disciplines.

3. The transgressive, the traditional: sexist discourses of grandmothering and ageing

5. Sexual harassment as reported by the Brazilian press: ambivalent and contradictory framings

6. "Until I got a man in he wouldn't listen": evidence for the gender order in New Zealand workplaces

7. Sexism and mediatised recontextualisations: the case of a battered woman who killed

8. The discourse of (re)exploitation: female victims in the legal system

9. Language-based discrimination in schools: intersections of gender and sexuality

Carmen Rosa Caldas-Coulthard is Professor of English Language and Applied Linguistics at the Federal University of Santa Catarina, Brazil. She is also Senior Research Fellow in the English Department at the University of Birmingham, UK, where she taught and researched for many years. She has published widely in the areas of Critical Discourse, Media and Gender Studies.

"A masterpiece of language and gender research, and a powerful political intervention in current times. Covering a broad geopolitical spectrum, and employing different theoretical and methodological approaches, this book is an indispensable read for everyone who wants to challenge sexism through intellectual and activist practices."

"Persuasive arguments for revisiting and reinterrogating the central questions for feminists in the 1960s, in relation to linguistically mediated violence, evaluating where progress has been made and where more nuanced contextualised work still needs to be done."

"This collection focuses our attention on the continued verbal and structural violence that shapes and restricts women’s experience in the world. The chapters reflect critically on the political, social and interpersonal impact of sexism; they are eloquent in outlining ways in which the world could be different – and in articulating the factors that impede those changes."