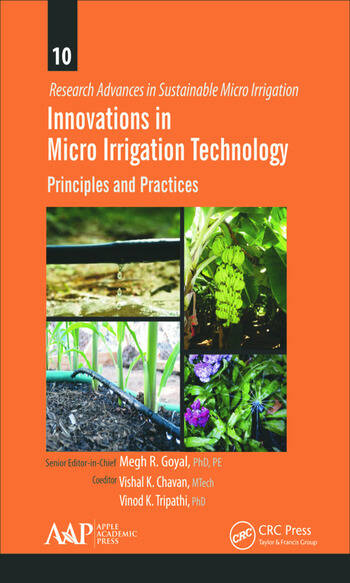 The tenth and final volume in the series Research Advances in Sustainable Micro Irrigation, this valuable book focuses on new and recent innovations in technology, methods, and applications for micro irrigation. The book covers a wide variety of topics, including successes in micro irrigation in India, how new methods have helped the local economies in several areas, ways to enhance crop yield through new building programs, and new technology and systems. It looks at different aspects of these new innovations in micro irrigation, including economic impact, evaluation methods, bubbler systems, success with particular crops, scheduling, and more. This book is sure to be a helpful resource for professionals and practitioners in the field as well as for students pursuing the field of agriculture.

Foreword 3 by B. J. Pandian

Performance of Drip Irrigated Soybean under Mulching: Egypt; A. Ramadan Eid, B. A. Bakry, and M. H. Taha

He was first agricultural engineer to receive the professional license in Agricultural Engineering in 1986 from College of Engineers and Surveyors of Puerto Rico. On September 16, 2005, he was proclaimed as "Father of Irrigation Engineering in Puerto Rico for the twentieth century" by the ASABE, Puerto Rico Section, for his pioneer work on micro irrigation, evapotranspiration, agroclimatology, and soil and water engineering. During his professional career of 45 years, he has received awards such as Scientist of the Year, Blue Ribbon Extension Award, Research Paper Award, Nolan Mitchell Young Extension Worker Award, Agricultural Engineer of the Year, Citations by Mayors of Juana Diaz and Ponce, Membership Grand Prize for ASAE Campaign, Felix Castro Rodriguez Academic Excellence, Rashtrya Ratan Award and Bharat Excellence Award and Gold Medal, Domingo Marrero Navarro Prize, Adopted Son of Moca, Irrigation Protagonist of UPRM, and Man of Drip Irrigation by Mayor of Municipalities of Mayaguez/Caguas/Ponce and Senate/Secretary of Agriculture of ELA, Puerto Rico.

He has authored more than 200 journal articles and textbooks, including Elements of Agroclimatology (Spanish) by UNISARC, Colombia, and two Bibliographies on Drip Irrigation. Apple Academic Press Inc. (AAP) has published his books, namely Biofluid Dynamics of Human Body, Management of Drip/Trickle or Micro Irrigation, Evapotranspiration: Principles and Applications for Water Management, Sustainable Micro Irrigation Design Systems for Agricultural Crops: Practices and Theory, Biomechanics of Artificial Organs and Prostheses, and Scientific and Technical Terms in Bioengineering and Biotechnology. During 2014–15, AAP is publishing his ten-volume set, Research Advances in Sustainable Micro Irrigation. Readers may contact him at: [email protected].

Vishal Keshavrao Chavan, MTech, is currently working as a Senior Research Fellow in the Office of the Chief Scientist under Dr. Mahendra B. Nagdeve of the AICRP for Dryland Agriculture at Dr. Punjabrao Deshmukh Krishi Vidyapeeth, Akola, the premier agricultural university in Maharashtra, India. His work included the evaluation of the basic mechanism of clogging in drip irrigation system. His area of interest is primarily micro irrigation and soil and water engineering. He obtained his BTech. in agricultural engineering in 2009 from Dr. Punjabrao Deshmukh Krishi Vidyapeeth, Akola, in Maharashtra, India; and his MTech from the University of Agricultural Sciences, in Raichur, Karnataka, India, in soil and water engineering. An expert on clogging mechanisms, he has published four popular articles and three research papers in national journals, and he attends international conferences.

Vinod Kumar Tripathi, PhD, is working as assistant professor in the Center for Water Engineering and Management at the School of Natural Resources Management of Central University of Jharkhand, Brambe, in Ranchi, Jharkhand, India. He obtained his BTech in agricultural engineering from Allahabad University, India; his MTech from the G. B. Pant University of Agriculture and Technology, in Pantnagar, India, in irrigation and drainage engineering; and his PhD in 2011, from the Indian Agricultural Research Institute, New Delhi, India.

He has developed a methodology to improve the quality of produce by utilizing municipal wastewater under drip irrigation during PhD research. His areas of interest are geo-informatics, hydraulics in micro-irrigation, and development of suitable water management technologies for higher crop and water productivity. He has taught hydraulics, design of hydraulic structures, water and wastewater engineering, geo-informatics to postgraduate students at Central University of Jharkhand, Ranchi, India.

He is an international expert and has evaluated funded plans for rural water supply and sanitation; and his PhD. in 2011, from Indian Agricultural Research Institute, New Delhi, India. He has published more than 32 peer-reviewed research publications and bulletins, and has attended several national and international conferences. 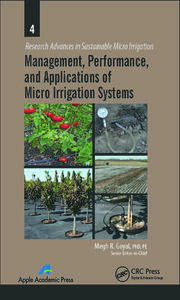 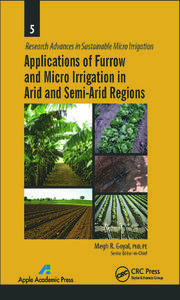 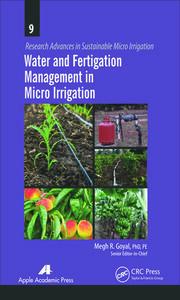